"I spend my entire life inside a box. A person should remain in a box only when he is dead." 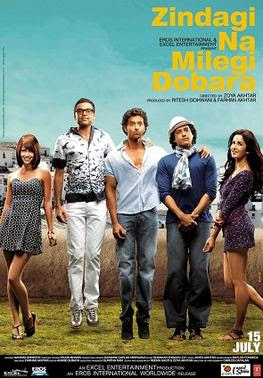 The translation for this title is "Life will never come again." It definitely gives off that vibe because it's a 'Carpe Diem, live for the moment' type of film. I will say Hrithik Roshan was one of the main reasons I chose this film and also the fact that I knew a lot of it was filmed in Europe. At 2 and a half hours, it's quite long and although I had to stop and start many times, I still thought it was pretty enjoyable and heartwarming.
The storyline is straightforward: Three friends decide to turn their fantasy vacation into reality after one of their friends gets engaged. Think of a more family-friendly version of The Hangover with a few hiccups here and there, some heartfelt moments and LOTS of beautiful scenery and cinematography.
Kabir is our groom-to-be and his fiancée Natasha appears pretty high maintenance from the very beginning. It was nice to see a variety in terms of the female characters, some were needy and quite materialistic, whereas Katrina Kaif, our heroine that the boys meet while traveling, is a breath of fresh air as the free-spirited, devil-may-care Laila.
I absolutely loved the fact that this was not a typical Bollywood film because it had a few kissing scenes, it wasn't overly dramatized and there were only one or two choreographed dance scenes that were a hybrid of Spanish and Hindi music (although in traditional Bollywood movies I live for the dance numbers). I appreciated that the director also focused on Spanish culture and traditional festivals like La Tomatina and running with the bulls. I'd love to see more films like these that include a taste of East meets West because I think many people don’t know a lot about the celebrations held on the other side of the world. Even though this movie was released 10 years ago, it didn't feel outdated or old-fashioned. 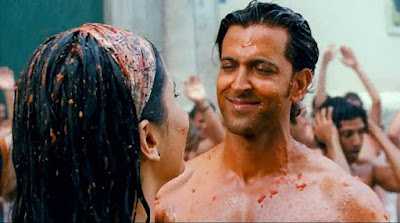 She said "I love you from my head tomatoes...."
Trivia Time
Imran played by Farhan Akhtar is seen having a fear of skydiving in the movie but in real life he's a certified skydiver and Arjun played by Hrithik Roshan is a certified scuba diver but his character is afraid of water.
Katrina Kaif's introduction scene on the beach was shot on a nude beach. The production crew had to continuously request people to move out of the frame.
The crew and the cast of the movie were present in Spain during the football finals in 2010 and got to see the country's historic win.
The La Tomatina festival shown in the movie was re-created in Buñol, Valencia, Spain with almost 16 tons of tomatoes specially flown in from Portugal.
Post the release, several tomatina themed events were organized across India.
As a part of the promotions, the cast took an actual road trip from Mumbai to Delhi via Gujarat and Rajasthan. En route, Hrithik and Katrina indulged in some roadside dhaba food, played pranks on common people and let their hair down like they do in the film.
Imraan (Farhan Akhtar) recited poetry throughout the movie, his father Javed Akhtar wrote them.
...................
Not sure I'd jump at the chance to watch this again but I would give it a decent 7/10. A nice travel movie about friendship, going on adventures, experiencing a little dash of romance, and learning more about yourself along the way.
Written by Gabrielle Boyd