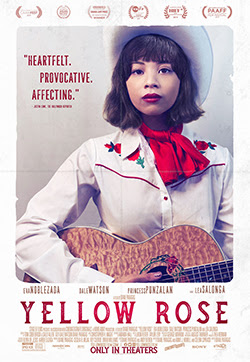 I had never heard of this film before and I was pleased to find it on Netflix after a LOT of searching. It didn't entirely move me to tears but I liked a lot of elements and it wasn't too heavy or overly dramatic.
Rose (Eva Noblezada), an undocumented 17 year old Filipina, dreams of one day leaving her small Texas town to pursue her country music dreams. Her world is shattered when her mom suddenly gets picked up by Immigration and Customs Enforcement. Rose, facing this new reality, is forced to flee, leaving behind the only life she knows, and embarks on a journey of self-discovery as she searches for a new home in the honky tonk world of Austin, Texas.
I thought Eva Noblezada did a great job as Rose especially during the emotional scenes. I found her singing voice to be awesome too, I only wish she sang more during the film. Super surprised to spot Lea Salonga in a teeny tiny role and I would have loved to see her sing more as well. In terms of the storyline, it was fairly basic but with little moments of triumph and sadness too. I found myself rooting for Rose to stay in the US for as long as she could even though she kept having to continuously find new places to reside. I'm happy the story didn't digress too much or focus on other external factors that might have led her down a scary path (like drugs/child predators etc)
Dale Watson, legit country singer is so-so when it comes to being Rose's mentor and father figure and his character fell a bit flat for me when he was acting but he made up for it whenever he sang or performed on stage. The two of them sounded great together and I wish there had been more duets! I think they wanted to focus more on Rose's struggles as an immigrant but it would have been such a wonderful journey if while she was gaining the courage to sing and play in front of people, she was discovered by some talent agency or record label that really wanted to have her and so they applied for her to have a green card and reside in the US legally. It was starting to just touch the surface of that by the end of the film but I feel they could have pushed it a bit more. It's interesting that there is only one line of trivia for this movie! Both Lea Salonga and Eva Noblezada have played the lead role of Kim in Miss Saigon on Broadway and the West End (that explains the amazing pipes!!)
All in all, I don't know if I'd necessarily watch the whole movie again but I'd definitely watch the clips of Rose singing her original songs or her duets with Dale. I'd agree with IMDB's rating. This Yellow Rose appears to be in full bloom.
Written by Gabrielle Boyd