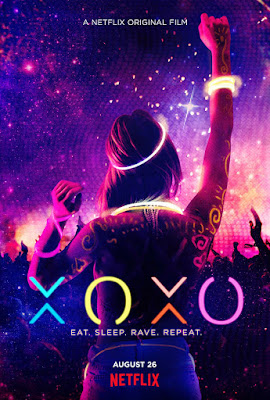 I've never been into raves but this film was actually surprisingly fun to watch and even though it wasn't exactly Oscar-worthy as some of the other movies on my list, it's not half bad.
The plot summary on IMDB was condensed into just one line: 'Six strangers' lives collide in one frenetic, dream-chasing, hopelessly romantic night.'
EDM is not my number one music genre of choice but when I was a lot younger (and probably highly intoxicated) I'm sure I partied hard like a lot of the kids in this movie. In the film, XOXO is an epic dance music festival and aspiring DJ Ethan Shaw finds out he's going to be making his stage debut in a matter of hours thanks to his best friend/manager Tariq (who reminded me so much of my friend who's a local actor) Loved-up couple Shannie and Ray want to have one last hurrah before Shannie moves to New York for a year so the two of them see XOXO as the perfect opportunity. Krystal (Sarah Hyland) plans to meet Jordan at the festival too, a cutie she's been texting and is convinced is her soulmate and one true love. Neil (Chris D'Elia) was the character I think I related to the most because he was 'the older guy' that was just sick of it all and didn't have any patience for all the mindless youth around him.
I think Christopher Louie did a pretty decent job writing and directing this colorful film because it felt like an extended music video with lots of vibrant costumes, neon makeup and he managed to capture the epic-ness of festival vibes. Even though the storyline is very simple and straightforward, it really made me feel like I was one of the painted faces in the crowd and perhaps the reason why I liked this movie more than most people is because it brought back such great memories of my first festival experience in the UK.
I found all the characters to be likeable and I remember feeling nervous for Ethan when he was about to make his debut on such a huge stage because clearly he was just a kid with the insecurities and doubts we all had as teenagers. Sarah Hyland was good too and I've always enjoyed her on Modern Family. I was happy when her character decided to just embrace the fact that she could make the most out of the festival without needing a boy by her side. Shannie and Ray were adorable as a couple and even though the movie had so many 'main' characters, it didn't spend too much time on each person so the pace was fast-moving and not draggy at all.
Unfortunately there isn't a lot of trivia about this movie and I honestly feel like it deserved a higher rating than 5.3. I'd say it's a pretty strong 6 because a lot of the animated emojis, text bubbles and LSD-induced scenes were fun to watch and well done considering it was Christopher Louie's directorial debut. Wouldn't say no to watching this again just to re-live those fantastic festival vibes I will always hold dear to my heart.
Written by Gabrielle Boyd