"You just don't get it, do you? Women are the saviors of the world!" 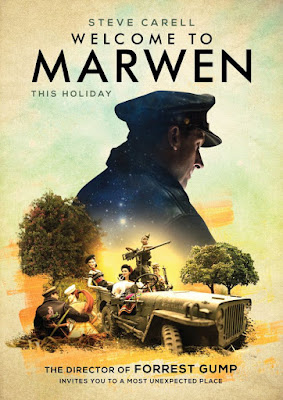 When I first saw the trailer for this film I had no idea what the concept was but it did seem very unusual. It made me think of Toy Story, Small Soldiers and Inglourious Basterds. I think I expected a little more since it's based on real events but it wasn't a bad film.
Aspiring artist Mark Hogancamp (Steve Carell) is a victim of a violent assault when five men beat him up and leave him for dead. Following the attack, Mark is left with little to no memory of his previous life due to brain damage inflicted by his attackers. In a desperate attempt to regain his memories, Hogancamp constructs a miniature World War II village called Marwen in his yard to help in his recovery. Unfortunately, Mark's demons come back to haunt him when he's asked to testify against the five men that attacked him.
I will say I really appreciated the animated scenes in this film because the dolls were so lifelike and realistic. I'm a huge fan of Steve Carell and he played Mark Hogancamp as a very odd, shy and socially awkward character that really makes you feel sorry for what he went through. The entire time I had a very saddening feeling because I knew all this happened to the real Mark Hogancamp and I wish they had shown more of his emotional turmoil about losing his memory and ability to draw. The tough girl dolls were pretty bad-ass but I think the movie could have introduced who the characters were based on a little sooner because at the start I was like 'ok these chicks are cool but what link do they have with our main man?'

Barbie and Ken never looked better
The town of Marwen was clearly an outlet for Mark to express how much he hated all the men around him throughout his struggles and it was quite endearing that he had a thing for women's shoes because he claimed it captured 'their essence' and there was something quite innocent about his affinity for high heels. Leslie Mann was brilliant as always and she never fails to play the likeable love interest that's just the right amount of sweet, thoughtful girl-next-door without being overly ditzy. There were a few cringe scenes and I'm not sure if those scenarios really happened like him proposing to Nicol and being rejected. There were a lot of subtle moments where you see little notes left around Mark's house about 'turning off the lights' or 'taking x number of pills in the morning' and those were so poignant and believable about him not being able to remember what he's meant to do everyday.
The miniature town was remarkable and had such intricate attention to detail, it's no surprise that director Robert Zemeckis was behind it all. He's responsible for classics like Back to the Future, Forrest Gump, Death Becomes Her and many more.
Trivia Time
The dolls were portrayed via motion capture by their respective actors and actresses.
When Mark lifts up the Time Machine and turns it on, you can hear the sound of the flux capacitor from the DeLorean of the "Back to the Future" trilogy. (He couldn't resist)
The person upon whom the film is based, Mark Hogancamp, was physically assaulted on 8 April 2008. Suffering injuries to every part of his body, Hogancamp was in a coma for nine days. His memories of his life before the assault have been virtually extinguished. Limitations of his health insurance prevented continued rehabilitation. Only three of his attackers went to prison, and all were released within two years. (Wish they had shown more of this)
Deja asks Mark to make a time machine and asks for it to fly. The time machine he makes resembles the DeLorean from the Back to the Future series, including the wheels that rotate to make the car hover. Both films were directed by Robert Zemeckis, and both films were scored by Alan Silvestri.
.............
I also found an interesting article that highlighted the woes that the real Mark Hogancamp experienced and you can read more about it here:
https://www.theguardian.com/artanddesign/2015/oct/28/mark-hogancamp-marwencol-jon-ronson-miniature-town-horrors-of-war
I'm not sure I'd watch this again but I am quite interested to watch the documentary 'Marwencol' as the town is now called. I'd agree with IMDB's rating and Welcome to Marwen made me feel like I was welcomed into a magical world of tough Glamonistas and Nazi soldiers.
Written by Gabrielle Boyd
Noel Boyd
Author, Life Coach and Motivational Speaker.