"This is a wondrous day. Today, we make history!" 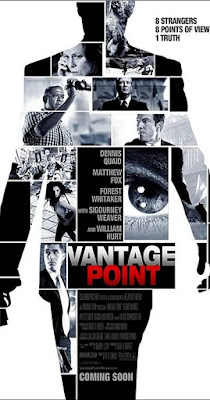 I actually enjoyed this film a lot more than I thought I would. Dennis Quaid is usually pretty good and the concept of the film was really unusual. I normally don't choose politically-themed action movies but when you're looking for a movie starting with the letter 'V', options can be limited.
The United States President is in Salamanca, Spain, about to address the city in a public square. We see a plain-clothes cop, his girlfriend with another man, a mother and child, an American tourist with a video camera, and a Secret Service agent newly returned from medical leave. Shots ring out and the President falls; a few minutes later, we hear a distant explosion, then a bomb goes off in the square. Those minutes are retold, several times, emphasizing different characters' actions. Gradually, we discover who's behind the plot.
I was quite surprised to see Zoe Saldana and Sigourney Weaver in the opening scenes of the film but then they never reappear later on. I would have liked to see more of their characters but I suppose they were not entirely essential to the main plot. Dennis Quaid is Thomas Barnes, Secret Service man of the hour and he does a great job portraying an anxious, jittery agent that previously jumped in front of the president to save his life. He's on edge throughout the entire public address scene and I felt his anxiety from the moment his character is introduced. It took me a while to recognize Edgar Ramirez because he's been in so many things, loved him as Gianni Versace in American Crime Story. 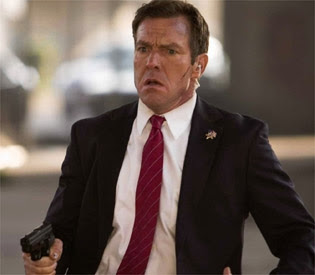 Dennis doesn't react well when someone says Randy is the better-looking brother
I loved the way the story unfolded by just showing all the characters' varying points of view of the same situation. Essentially all the vital moments of the attack take place in the same 15-30 minutes but we only see it all make sense about halfway or three quarters of the way through. The car chases were very well done but did make me a little dizzy. Some scenes were extremely unnerving and jarring, like the entire crowd running amok and dealing with the aftershock of the bomb blasts and the bit where the little girl Anna is standing in the middle of a busy road and Forest Whitaker has to run out and save her life.
Trivia Time
In order to keep the dozens of video monitors in the TV control booth synchronized properly, the screens were actually greenscreen panels that were replaced in post-production.
The explosion on the Plaza was filmed by fifteen different cameras.
TV Executive Rex Brooks was originally written as a male. Director Pete Travis changed it to a woman because he felt the movie lacked a strong female character.
The studio originally wanted to shoot the entire film in Salamanca, Spain, but the local government refused to close the Plaza Mayor for nearly 3 months. Production was moved to Cuernavaca and Puebla, Mexico. Only the scenes filmed from the air were shot in Spain.
When the bomb goes off, with the aerial view of the plaza, the same smoke effect that covers the view, is the same special effect that is use in Back to the Future III, when the train explodes.
One of the key themes of this film is the way that expectations influence our point-of-view. To emphasize this, some lines were filmed in two different ways, depending on whose POV is being represented, and what the audience has learned about the plot layers. In particular, several of Matthew Fox's scenes were played in two subtly different ways depending on whether we're seeing him as the good guy or we've realized he's a villain.
..............
I wouldn't say no to watching this again although seeing it for the first time definitely maintained the element of surprise and unpredictability. I'd give it a solid 6.5 - 7/10 as a reasonably engaging action flick just because of the unique way the story was told. From my Vantage Point, this was not a bad film.
Written by Gabrielle Boyd