"Everyone needs a co-pilot." 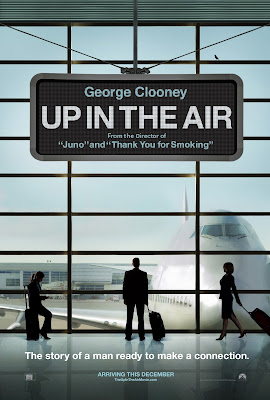 This was such a delightful little comedy based on a novel by Walter Kirn but with some bittersweet moments and real-life downfalls. George Clooney has always been more of my mother's favorite because of his dashing good looks and I used to consider him quite one-dimensional but he wasn't terrible in this and neither was Anna Kendrick.
Ryan Bingham (Clooney) enjoys living out of a suitcase for his job, travelling around the country firing people, but finds that lifestyle threatened by the presence of a potential love interest, and a new hire presenting a new business model.

I really loved the sequences they used in this film to show time passing and Ryan travelling from state to state. It was so therapeutic to watch him just smoothly disembark and board the next plane, check into another hotel etc. Strangely it made me feel like I was travelling alongside him the whole time. I was actually quite envious of his fictional job because of how much he got to see and experience although I know in real life I would never be able to fire people for a living.
I've enjoyed Vera Farmiga ever since Bates Motel and she does a great job as Alex. One thing I appreciated a lot in the plot was that the 2 female leads had loads of things in common but were also vastly different in terms of their personalities and expectations in a relationship. It was interesting to discover that director Jason Reitman (responsible for movies Juno, Thank you for Smoking and several others) is the son of none other than Ivan Reitman, the legend responsible for Ghostbusters I and II, Fathers' Day and many more. 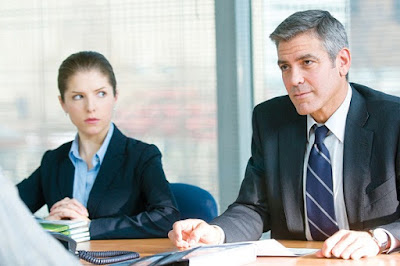 Even Anna Kendrick can't resist George's salt and pepper look
George Clooney was charming and basically played a more exaggerated version of himself since in real life he has been known to be quite the ladies man. I didn't really buy into the concept of him being a motivational speaker but I did find a lot of the content he shared quite deep and his character development didn't feel forced or unrealistic. Loved the small roles played by Jason Bateman and J.K Simmons too who never fail to steal the show with how organic and charismatic they can be. Even though the film was released in 2009, some of the issues they presented are still relevant today (especially during COVID) like companies letting a LOT of staff go, or choosing to use video-conferencing tools like Zoom instead of travelling for business.
Trivia Time
A large number of the people we see fired in the film are not actors, but people who were recently laid off. The filmmakers put out ads in St. Louis and Detroit posing as a documentary crew looking to document the effect of the recession. When people showed up, they were instructed to treat the camera like the person who fired them and respond as they did, or use the opportunity to say what they wished they had. A way to discern who are the actors, and who are the real people, is that the real people do not have dialogue with George Clooney or Anna Kendrick, as they were shot separately. Jason Reitman did this intentionally, feeling that the real people would freak out Clooney and Kendrick. (This was definitely something I sensed while watching it)
When Bob (J.K. Simmons) shows Ryan a photo of his two children, it is a photo of Simmons' real children.
George Clooney's wardrobe for the entire movie actually fits in one carry-on suitcase.
When Alex is at the Atlanta airport, she asks Ryan if he knows a good place for ribs. Ryan tells her to go to "Fat Matt's", a real rib shack on Piedmont Avenue. Jason Reitman is a big fan of the restaurant. In return, owners Matt and Kelly Harper presented Reitman with a card entitling him to a "lifetime of ribs".
At a press screening, Jason Reitman said that his father and producer Ivan Reitman had written "the best line in the movie." However, he declined to reveal which line in particular.
Anna Kendrick later claimed that she was financially insecure as a working actress when she made this movie, and that during the promotional tour her wardrobe was rented for her. Kendrick admitted that she felt bad about that, she thought it sent a misleading impression to young actresses.
Jason Reitman has worked with J.K. Simmons in Thank You for Smoking (2005), Juno (2007), Young Adult (2011), Labor Day (2013), and Men, Women & Children (2014).
George Clooney and J.K. Simmons both played DC characters. Clooney was the titular character in Batman & Robin (1997), & Simmons was Commissioner James Gordon in Justice League (2017).
(Cameo) Walter Kirn: The author of the novel sits to the left of Ryan Bingham during Natalie's introduction.
..................
I'd agree with IMDB's rating and I wouldn't say no to watching this again because it doesn't have a cookie-cutter Hollywood happy ending, but it's still a feel-good movie that leaves your spirits quite high Up in the Air.
Written by Gabrielle Boyd
Noel Boyd
Author, Life Coach and Motivational Speaker.