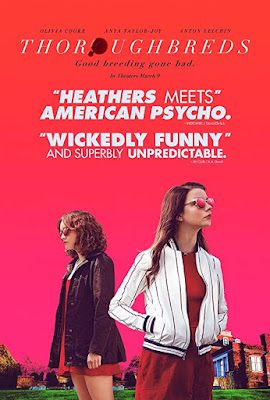 This is going to be my shortest review ever. I did NOT enjoy this film at all. I was really surprised at how awful it turned out to be because I loved Olivia Cooke in Bates Motel and Anya Taylor-Joy in The Queen's Gambit. DO NOT believe what's written on the poster, in my humble opinion, I didn't see any references to Heathers OR American Psycho.
Two upper-class teenage girls in suburban Connecticut rekindle their unlikely friendship after years of growing apart. Together, they hatch a plan to solve both of their problems-no matter what the cost.
I'll be honest, I chose this movie because I knew it was less than 2 hours and I thought it would be an easy watch. Boy I couldn't have been more wrong. When I read the reviews a lot of people considered it to be a dark comedy, but I didn't view it as one at all. It was not funny or interesting in any way. Many reviews I saw also focused on the fact that they are two attractive girls with evil intentions and that's why they gave the film high ratings #facepalm.
The plot was extremely thin, dialogue was boring and some scenes took way too long to get to the point and all the characters had no depth whatsoever. I felt like the writer was trying very hard to make the premise dark, menacing and ominous but he didn't spend enough time actually building on the relationships between characters for me to be even remotely emotionally invested in any of them.
Amanda (Cooke) nonchalantly talks about mercy-killing her horse and is supposed to appear as a sociopath with no feelings of guilt but she just comes across as extremely dull and one-dimensional instead of psychotic and murderous. Lily (Taylor-Joy) is the poor little rich girl who hates her stepfather (for no apparent reason other than the fact that he's kind of douchey and wants her to go to a boarding school of his choosing) Normally I try to find something I like in every movie I watch but this was the first time I really couldn't find any redeeming factors. Didn't bother with the trivia tidbits and if I could give it a negative rating I would. 100% never watching this again.
Written by Gabrielle Boyd