"If you’re tangled up, just tango on.” 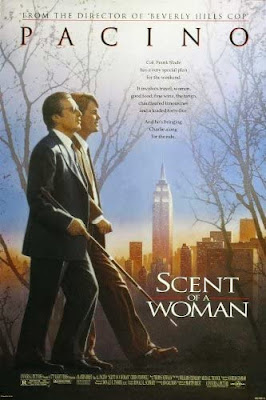 I've known about this film for ages but I always thought it was about an older man finding love and I was totally wrong! Never been a huge fan of Al Pacino but this movie changed my mind.
Prep school student Charlie Simms (O'Donnell) needs money and so he agrees to "babysit" blind man Frank Slade (Pacino) but the job is not at all what he anticipated.
The first 30 minutes of the film is quite interesting because it introduces all the pivotal characters and their unique traits. Pacino plays Colonel Frank Slade as a hostile yet intuitive blind man that is impatient and extremely cantankerous. I was really impressed by how well he was able to portray a blind person. Charlie is soft-spoken and doesn't really fit in with the other rich boys at his school. An elaborate prank embarrasses a school superior and Charlie finds himself having to decide whether he wants to be a snitch or cover for the people responsible.
Towards the middle the film tends to slow down quite a bit but I think it's meant to show Frank's vulnerable side which was quite saddening. I kept waiting for Frank to meet an enchanting woman because the entire time I thought it was going to develop into a romantic storyline, but eventually I realized it was more about the relationship between him and Charlie. It was clearly shown that despite being visually impaired, Pacino had the gift of always guessing the 'scent of a woman' i.e what perfume she had on/what soap she used. His tango scene was pretty impressive too but I really thought Gabrielle Anwar was going to play a bigger part. 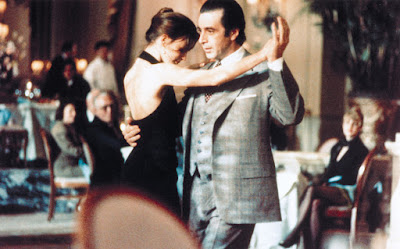 Gabrielle Anwar rehearsed this scene for 3 weeks alone. Al Pacino didn’t rehearse at all. Later, she admitted that Al Pacino constantly stepped on her feet and almost broke her toes. In an interview, she said, “It’s Al Pacino, for God’s sake, I couldn’t exactly complain.”
The climax of the film was very much worth the journey of the 120 minutes it took you on. Pacino's monologue at the school hearing was impeccable and to me, that was what earned him his Academy Award. Initially, I wasn't crazy about Chris O'Donnell but he did show a few moments of great acting especially in the hotel room when he stops Pacino from 'blowing his brains out.'
Trivia Time
Al Pacino was helped by a school for the blind in his preparation for this role. He said that he made himself appear blind by not allowing his eyes to focus on anything.
Leonardo DiCaprio auditioned to play Charlie. (He should have gotten it!)
As a guest on Inside the Actors Studio (1994) (Oct. 2, 2006), Al Pacino recounted to host James Lipton how he'd had an embarrassing moment in a crowded elevator after winning his first Oscar. Unbeknownst to Pacino was that the head of his statuette was poking a well-known actress in her posterior. When she turned around, Pacino quickly explained that his Oscar, not he, was to blame for her discomfort.
Al Pacino says "hoo-ah" or a variation of it exactly ten times throughout the movie.
This movie is the remake of the 1974 Italian drama Profumo di Donna. The film was even nominated for an Oscar in the Best Foreign Language Film and Best Writing (Screenplay Adapted From Other Material) categories. Maybe this is why Scent of a Woman has obvious references to Italy — Al Pacino as the lead actor and the name of the girl he dances the tango with, Donna, which means woman in Italian.
Philip Seymour Hoffman auditioned for his role five times before he was cast. He was working various odd jobs in between sporadic film and TV roles, stocking shelves at a Manhattan deli before being cast. Hoffman cited this as the film that changed everything for his career.
It was reported that, in order to make Chris O'Donnell cry during Lt. Colonel Slade's near-suicide scene, Al Pacino had to take him aside and scream at him "drill-sergeant style".
The screenplay writer for Scent of a Woman, Bo Goldman, said, “If there is a moral to the film, it’s that if we leave ourselves open and available to the surprising contradictions in life, we will find the strength to go on.”
...........................
I will say I'm glad I didn't give up on this movie and it made me want to watch more Pacino films. I don't know if I'd rate it as an 8 but definitely a strong 7. Scent of a Woman lingered on as a sweet tale between two very different individuals that somehow found a meaningful connection with each other.
Written by Gabrielle Boyd
Trivia taken from IMDB and https://brightside.me/wonder-films/20-secret-facts-about-scent-of-a-woman-which-was-actually-a-remake-798903/
Noel Boyd
Author, Life Coach and Motivational Speaker.