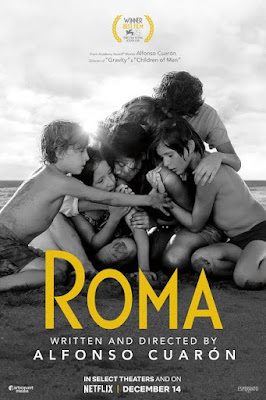 I wanted to include as many foreign films as I could on this list and this artistic black and white movie was beautifully done but trust me, Alfonso Cuarón takes his time to tell a story.
Cleo (Yalitza Aparicio) is one of two domestic workers who cares for a family with four children in 1970s Mexico City. 'Roma' tells her tale over the course of a year, from the quadrennial 1970s World Cup to the blood-drenched Corpus Christi Massacre--the unforeseen and sometimes unbearable complications of love, life and death.
I'll be honest, I nearly gave up on this film a number of times. It took a really long time to get anywhere. Alfonso Cuarón (who is responsible for directing films which include Gravity, Children of Men and even Harry Potter and the Prisoner of Azkaban) really spent ages on many scenes, some were aesthetically gorgeous, but some felt a little too long-drawn and I found my attention waning quite a bit, especially at the beginning. I kept asking 'does this really have to go on for that long?' There was also a nude scene that I didn't expect and couldn't determine why it was even necessary. Another sequence that had me befuddled was when a forest fire was happening in the background with chaos and panic but a random character comes to the foreground and starts singing a Norwegian song. I think the intention was to juxtapose the chaotic scene perhaps with a poignant, poetic tune but it just felt confusing to me. I did appreciate a lot of the shots that were just one continuous take, especially the closing scenes in the ocean. 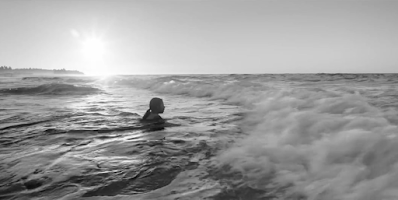 Bear in mind that Yalitza Aparicio really can't swim...and yet she did this scene flawlessly
There were a lot of moments that I did feel for Cleo but the one scene that left me extremely emotional and very traumatized was during the delivery of her baby girl only to find out she was stillborn. It was absolutely gut-wrenching in the worst way and it's one of those things that you just can't unsee or bounce back from. I have never seen a scene so devastating unfold in the way it did in this film. After reading more about the real-life history that took place in Mexico during that time, I strongly felt a deeper understanding and empathy for the people that went through all that pain and suffering. There's a LOT of interesting trivia about this film.
Trivia Time
The lengthy delivery scene in the hospital was only shot once. The doctors and nurses were real, not actors, hired to make the scene feel more authentic.
Alfonso Cuarón decided to shoot on location in Mexico City instead of using a soundstage. This is one reason for the several appearances of airplanes, because according to Cuarón they had a plane passing by every five minutes.
Roma was based heavily on director Alfonso Cuarón's real-life nanny, Liboria "Libo" Rodriguez, when he was a child. He is portrayed in the film by Carlos Peralta (Paco). The film is dedicated to her. As of 2018, the real Cleo, Liboria Rodríguez (Libo), is still alive and still part of Alfonso Cuarón's family, or Alfonso Cuarón's family is still part of Libo's life. She has made cameos or brief appearances in several of his previous films, including Y Tu Mamá También (2001) in a scene where she brings Diego Luna a sandwich.
Alfonso Cuarón was the only person on set to know the entire script and the direction of the film. Each day, before filming, the director would hand the lines to his cast, attempting to elicit real emotion and shock from his actors. Each actor would also receive contradictory directions and explanations, which meant that there was chaos on set every day. For Cuarón, "that's exactly what life is like: it's chaotic and you can't really plan how you'll react to a given situation."
Alfonso Cuarón's statement for the film: "There are periods in history that scar societies and moments in life that transform us as individuals. Time and space constrain us, but they also define who we are, creating inexplicable bonds with others that flow with us at the same time and through the same places. Roma is an attempt to capture the memory of events that I experienced almost fifty years ago. It is an exploration of Mexico's social hierarchy, where class and ethnicity have been perversely interwoven to this date and, above all, it's an intimate portrait of the women who raised me in a recognition of love as a mystery that transcends space, memory and time." (This made me view the movie in a completely different light)
First foreign language film to win the Academy Award for Best Director.
Alfonso Cuarón is the first person in Oscar history to be nominated for and to win the Academy Awards for both Best Director and Best Cinematography in the same year and for the same film. He received additional nominations for Best Original Screenplay and Best Picture for the film as well.
First black-and-white film to win the Academy Award for Best Cinematography in 25 years, the previous winner being Schindler's List (1993).
While introducing the film at a screening at the New York Film Festival, Guillermo del Toro, who was also the president of the jury at the 75th Venice Film Festival which awarded the film with the Golden Lion, named Roma one of his top 5 favorite films of all time.
Every scene of the movie was shot on location where the events depicted took place or on sets that were exact replicas.
When Yalitza Aparicio met Libo, the person Cleo was based on, Libo never told Aparicio anything about her life that was going to happen in the film, only things that happened to her before the film starts. So after the birth scene, Aparicio cried non-stop.
Alfonso Cuarón claimed that it took six takes to get the shot of Cleo rescuing the children at sea and that the take used in the film was the only one in which the shot wasn't ruined by the camera derailing off its track. After which they ran out of time. Cuarón was very frustrated having to wrap the scene with only one usable take.
Along with Crouching Tiger, Hidden Dragon (2000), Roma holds the record for most Oscar nominations for a foreign language film (10).
....................
I won't watch this again and I'm not sure I agree with IMDB's rating but I do think Alfonso Cuarón deserved his Academy Award for the effort, artistic choices, cinematography and raw human emotions and experiences that went into making this film. I struggled to find a connection with the characters and while I did shed a few tears, I wouldn't consider it as high as a 7 or an 8. Roma left my mind roaming and perhaps I couldn't fully appreciate the depth of the artistry behind it.
Written by Gabrielle Boyd
Noel Boyd
Author, Life Coach and Motivational Speaker.