"My sense of humour is very nice. You'll find out soon..." 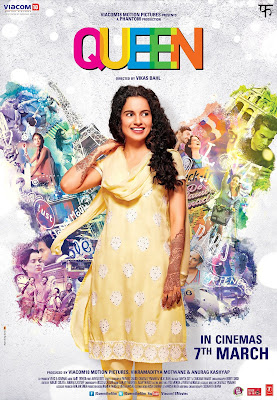 When I was looking for a movie starting with the letter 'Q', this showed up in my results and it was between this and Quiz Show. I'm glad I chose this flick about female empowerment that leaves you feeling warm, fuzzy and proud to be a woman.
A Delhi girl (Kangana Ranaut) from a traditional family sets out on a solo honeymoon after her marriage gets cancelled. Along the way, she learns more about herself and meets interesting characters that lift her spirits and help her get her groove back.
In the first few minutes of the movie, you're already taken on an emotional rollercoaster ride because you're shown all the colorful, vibrant shots of traditional Indian pre-wedding celebrations, with amazing costumes, dancing and happy faces. It reminded me of my own wedding and made me feel like I was celebrating that special day all over again! But in our queen's case, her happiness was short-lived because a few days before the big day, her fiance Vijay decides he doesn't want to marry her anymore. What a tool.
Your heart breaks as you see her deal with the inevitable sorrow and loneliness that comes with being jilted on a day that you're supposed to remember for the rest of your life. (It reminded me of Mr Big walking out on Carrie in SATC. That killed me the first time I watched it) After a few days of grieving, our heroine decides she still wants to travel to Europe on what would have been her honeymoon. This is where I started to feel 'Eat, Pray, Love' vibes. 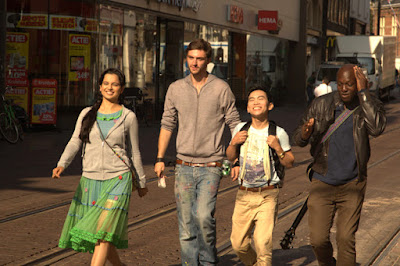 Going for a United Colors of Benetton casting call
I really enjoyed all the quirky characters she encountered on her travels and just seeing her evolve into a stronger, independent woman that embraced all the beauty and wonder life has to offer. It made me reminisce about my solo travels and all the unforgettable experiences I had while seeing the world. I think Kangana Ranaut did a wonderful job by initially portraying a very sheltered, insecure woman that soon learned how much she was worth and what she was capable of if given the opportunity. I hated the character of Vijay but I think that was the idea because he played the typical misogynistic, smug man who came crawling back after he realized how much he had lost.
Trivia Time
Vikas Bahl said, that they didn't have the budget to shoot elaborate sequences or stay put at one location for long. "We were just 25 people from India for the shoot. We would book a place for a couple of hours, then rush to another location. We would eat at the nearest hotel where we were shooting, and at times Kangana would change her clothes in public toilets! We shot in about 145 locations in 40 days."
Kangana Ranaut won the Best Actress Award at the National Film Awards for her portrayal of Rani Mehra. It is the highest honour for any actor in the country.
Lisa Haydon learnt French for a month to prepare for her role as a Indo-French hotel staff member, Vijaylaksmi.
The film's story is loosely based on Alice in Wonderland. (I didn't really get any references from AIW but maybe it was more about her going on a journey and learning more about people and herself)
....................
It was a refreshing choice that they didn't immediately throw in a new love interest for her to have a rebound with, but they suggested it very subtly towards the end. I wouldn't say no to watching this again because of how heartwarming it is and I think I actually preferred it to EPL. Not sure I'd rate it as high as an 8, but definitely a strong 7. Queen was a royal delight.
Written by Gabrielle Boyd
Noel Boyd
Author, Life Coach and Motivational Speaker.