"...the Internet and dreams are similar. They're areas where the repressed conscious mind escapes." 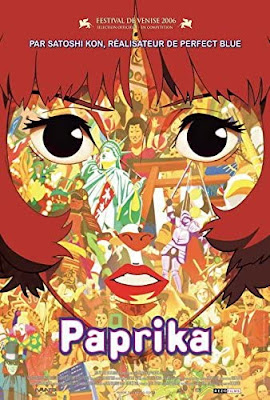 Since I was a teenager, I've known about the existence of this film but never felt compelled enough to watch it because I remember friends telling me it was 'super trippy.' They were not wrong.
Three scientists fail to secure a device they've invented, the D.C. Mini, which allows people to record and watch their dreams. A thief uses the device to enter people's minds, when awake, and distract them with their own dreams and those of others. Chaos ensues. The trio - Chiba, Tokita, and Shima - assisted by a police inspector and by a sprite named Paprika must try to identify the thief as they ward off the thief's attacks on their own psyches.
Many scenes reminded me a lot of Inception because the story clearly revolves around dreams and other people 'entering' or 'invading' them. After doing some research, I discovered I wasn't the only one to draw comparisons to it. Several critics and scholars have noted many striking similarities that appeared in Nolan's masterpiece, including plot similarities, similar scenes, and similar characters. There are gravity-defying hallways, and even an "elevator with each floor representing another layer of the host's subconscious."
Did Christopher Nolan think we wouldn't notice?
Because of the surreal animation that was used, a lot of the time I felt like I was on LSD or some other hallucinogenic. The sheer randomness of the characters and visuals were off the hook and while I did appreciate how far the director Satoshi Kon pushed the boundaries, the storyline was a little tough for me to follow. I think Inception (although initially confusing, eventually began to make sense)
I had to read up about Paprika's plot after the movie was over just so I could grasp what actually happened during those psychedelic 90 minutes. It's actually based on a novel written in 1993 about a research psychologist who uses a device that permits therapists to help patients by entering their dreams. (Thank you Wikipedia!)
The concept itself is genius and the possibilities to show that in a movie seem limitless. With that in mind, I think Paprika might have overstimulated my little brain with all the multiple identities for each character as well as their own individual motives and goals. Perhaps I should have paid more attention from the very beginning, then I might have felt more emotionally invested by the time I got to the ending.
For a film released more than a decade ago, there is surprisingly very little trivia about it but I found an interesting website that highlights the differences and similarities with this and Inception.

You can read more here:
https://www.cbr.com/why-paprika-is-a-better-dream-movie-than-inception/
I can't see myself re-watching this as many times as I've watched Inception (but I am biased because of how much I enjoy DiCaprio as an actor) and I don't think I'd rate it as high as a 7. At best I'd give it a 6/10 for the amazing animation and I commend the writers and artists for having such vivid imaginations. If you like trippy, sci-fi animated films, Paprika is the right condiment for you.
Written by Gabrielle Boyd
Noel Boyd
Author, Life Coach and Motivational Speaker.