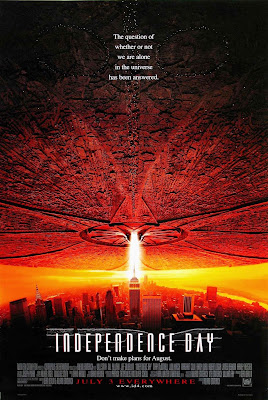 It's quite serendipitous that this is movie #9 on the list and I was only 9 when this originally came out. Back then I clearly wasn't compelled to watch it because I've never really been into alien movies unless there was an element of comedy like the Men in Black series or Mars Attacks. I must say I didn't dislike this film and there were a few memorable scenes, characters and jokes that aren't as outdated as I expected them to be since this was released more than 2 decades ago.
Giant spacecraft are heading to Earth just a few days before July the 4th. After ex-scientist David Levinson (Jeff Goldblum) discovers that the aliens are going to attack major points around the world in less than a day, New York, LA, Washington as well as Paris, London and Moscow become obliterated. The President of the United States (Bill Pullman) and Captain Steven Hiller (Will Smith) along with hundreds of other survivors devise a plan to fight back against the extraterrestrials, and Independence Day becomes the day humanity will fight for its freedom. 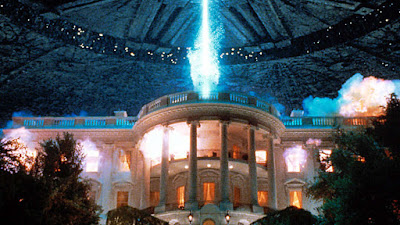 Maybe the aliens were actually trying to help...
Considering that this movie was released in the mid-90s and CGI wasn't as advanced as it is now, most of the special effects are still pretty decent and realistic, especially the one of the White House blowing up into a million little pieces. The appearance of the aliens was also pretty rad but I only wish they had shown more battle scenes up close between them and humans, instead of dogfights with jets and missiles being launched.
I always enjoy Jeff Goldbum's performances because somehow he gets away with playing the same smug, knowledgable intellectual yet still incredibly suave gentleman. Will Smith basically just played Will Smith as usual but his character was relatively likeable and I think I would have cared a little if he had blown up into a million little pieces. 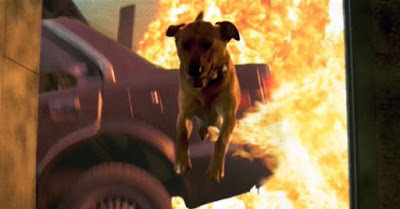 Every dog has its (Independence) Day
As expected there were some cheesy unbelievably over-the-top scenes like how Boomer the dog manages to escape the fiery explosions of the spaceship along a busy car-filled highway (but I was very thankful he did). Or how the First Lady can somehow survive half the movie but as soon as she gets medical attention, the President is told she's not gonna make it. Or how Will Smith inexplicably knows how to pilot an alien spacecraft that crash landed on Earth 50 years prior to that very moment.
The concept that was probably the most laughable was how perfect the timeline was for us humans. 'They're gonna annihilate us all." (But not before we discover a way to defeat them in the next 48 hours and save the planet #howconvenient)
Some interesting trivia about this other-worldly film:
The scene in which Will Smith drags the unconscious alien across the desert was filmed on the salt flats near Great Salt Lake in Utah. Smith's line "And what the hell is that *smell*?" was unscripted. Great Salt Lake is home to tiny brine shrimp. When they die, the bodies sink to the bottom and decompose. When the wind kicks up just right, the bottom mud is disturbed and the smell of millions of decaying brine shrimp can be very very bad. Apparently, nobody thought to warn Will.
Jeff Goldblum uses one of his lines from Jurassic Park (1993) in this film: "Must go faster, must go faster!," and is delivered with the same intensity.
On the Bonneville Salt Flats, cast and crew wearing long pants still managed to get sunburns on their legs; the white salty surface reflected the sunlight up their pant legs.
The White House which exploded was built at 1/12 scale, just to be blown up. Nine cameras filmed the explosion at various speeds, one of which was twelve times faster than normal, then played back at normal speed to make the explosion seem larger and slower on film. This scene appeared prominently in most teasers, trailers and TV spots, and is widely regarded as the film's most iconic shot.
The highest grossing movie of 1996 and became the second highest grossing film of all time worldwide, second only to Jurassic Park (1993). Jeff Goldblum was in both films.
To achieve the look of Houston as seen from the air at night, the crew simply poked holes in a sheet of black construction paper, placed the paper in front of a bright light in a smoke-filled room, and photographed it using special lighting to accomplish the effect.
During the scenes where David is searching for his ex-wife's telephone number, his computer screen displays humorous street names such as 'Heresheis Avenue.'
To give the aliens a slimy appearance, KY Jelly was used. It had to be applied to the alien prop several times during outdoor scenes because the intense heat in the Utah desert caused the jelly to evaporate in just a few minutes.
............
I know this was just a far-fetched alien movie made purely for entertainment, but I did see some truths hidden in the mix. The existence of Area 51 for starters. I think this film did justice to an alien invasion scenario because it showed plenty of mass hysteria and people just looting and plundering because of the uncertainty and desperation they were experiencing. I don't doubt that those scenes would be very possible in our society now, with crackpots indulging in panic-buying and hoarding for the apocalypse. I'm not sure if I'll watch this again anytime soon but I agree with IMDB's rating and it's a pretty strong 7/10 for me too. If the aliens do invade, I hope there will be a Jeff Goldblum-type hero to save the day.
Written by Gabrielle Boyd
Noel Boyd
Author, Life Coach and Motivational Speaker.