"I feel like I can be anything with you." 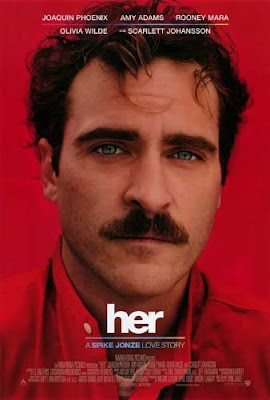 When this first came out, I avoided it because I felt it was pretty overhyped and now I wish I had skipped past it on my list of recommended films on Netflix. I don't mind Joaquin Phoenix in the roles I've seen him in and the premise of this story initially piqued my curiosity because I thought it would be something completely different and unexpected. Boy was I wrong.
Theodore Twombly is a lonely man going through a divorce. The setting of the film is in the distant future, where technology is part of everyone's daily routine and Theodore decides to purchase an artificially intelligent operating system that he soon develops a relationship with.
I honestly don't know how this managed to score an 8/10 on IMDB. For the first 20-30 minutes of the movie, I was intrigued because of the way technology was incorporated into Theodore's job and personal life. The fact that everyone seemed to be talking to themselves or looking at an electronic device made me feel like our own society was already heading in that direction. But as the story went on, I started to question 'where is this going and when is it going to get interesting?'
The concept of Samantha, an A.I OS voiced by the sultry Scarlett Johansson didn't seem exciting to me at all. She was basically a disembodied version of every jealous, insecure woman that would overthink situations or try to be a know-it-all about everything in the entire world and I just couldn't grasp the fact that she could express emotions or feelings when she was clearly just a computer. A lot of the time I ended up feeling quite sorry for Theodore because he couldn't seem to connect with other human beings the same way he clicked with Samantha. (See what I did there?) 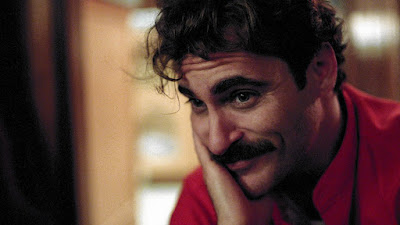 Is it just me or does moustached Joaquin look like a young Tom Selleck?
I was really hoping that this would be Black Mirror-esque since I love that series and all the ways it shows the dark side of technology. There was nothing of that sort and I just felt like the entire movie was downright weird. Normally I like weird, but this is the kind of weird where it seems to be 'quirky' or different for the sake of it. There were no real conflicts or struggles with the main characters besides loneliness and Theodore going through his divorce (we never really find out the main reason either, just a vague flashback of 'us growing apart') His loneliness is also not that extreme because he still has friends and colleagues that he spends time with. It would have been more riveting if he was a true antisocial loner with no one else in his life and so him connecting with the sexy computer voice would make more sense. I would have even preferred it if we found out at the very end that he had multiple personalities the entire time and had really just been talking to himself. The ending was so anti-climactic that I felt so dissatisfied and annoyed.
Here are some of the most interesting trivia tidbits I could find about an otherwise dull movie:
Most of the city backgrounds, especially the ones featuring skyscrapers, are actually filmed in Shanghai. You can see many very identifiable skyscrapers such as the Shanghai World Financial Center. There are even Chinese signs if you look carefully.
This is the only movie Spike Jonze has written as well as directed, completely from his own original script. (So he's the one to blame!! I found out that he contributed to a lot of Jackass movies and episodes which I love, and a few Fatboy Slim music videos. It's safe to say that those will be the only projects of his that I support)
As of March 2021 Rooney Mara and Joaquin Phoenix who play a married/divorced couple in the movie are engaged to be married and have a son, River, together.
Sofia Coppola won the 2003 Best Original Screenplay Oscar for Lost in Translation (2003) [Another film I unfortunately did not enjoy] which was loosely inspired by her relationship with her then-husband Spike Jonze. Ten years later, Jonze would win the same award for 'Her', both films star Scarlett Johansson. (Hmm, what a coincidence! Or is it?)
'Her' also won Best Film and Best Director for Jonze at the National Board of Review Awards, and the American Film Institute included the film in its list of the top ten films of 2013. (How...just how?)
............
I will say I did appreciate the cinematography a great deal because of the use of bright, vivid colors and pretty scenery + warm sunshine/sunset filters. Those were the only positives I could find by the time the movie ended. I also managed to spot a much younger Chris Pratt in a supporting role and that was a pleasant surprise. Genuinely still feel that this is an overrated movie that I 100% will not watch again and I would only give it a 5/10. I'd rather re-watch all the seasons of Black Mirror.
Written by Gabrielle Boyd
Noel Boyd
Author, Life Coach and Motivational Speaker.