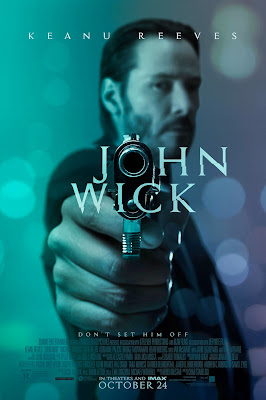 I avoided watching this for ages because I knew the storyline involved John Wick's dog being killed. Obviously I know it's just a movie but I can't handle scenes that include animal abuse/torture. I am a huge fan of Keanu though so I finally mustered up the courage to get through it, and I wasn't disappointed!
The plot is simple, ex-hit-man John Wick (Keanu) comes out of retirement to track down the assholes who stole his car and killed his dog. That's all you need to know.
For the first 10-15 minutes of the movie I was already on edge because I knew what was coming. When they introduced Daisy the dog I tried my best not to develop an emotional attachment to her but it was impossible! I had to shield my eyes and cover my ears during the scene in which the Russian gangsters take everything from John Wick and leave him battered and bleeding. 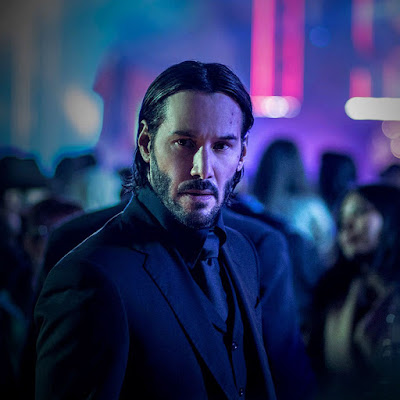 Only Keanu could get away with that hairstyle and still look cool
The action sequences were done brilliantly and the entire theme of the movie was for lack of a better word, rad. Keanu was the chief badass and he pulled it off so perfectly. I gotta say his apartment was absolutely breathtaking too, the assassin game must pay well.
The stunt driving, lighting and color effects were genius and the dialogue wasn't too cheesy either. Of course, it has that element of incredulous immortality on John Wick's part because the bugger just refuses to die but that's what we all hope for anyway. Soundtrack is super industrial and very apt for this genre. I found a ton of interesting trivia that amounts to more than my humble review.
-------------------
According to Keanu Reeves, he did 90% of his own stunts in the film. (Not bad for a dude in his 50s!)
Keanu learned and memorized the nightclub fight sequence the day that the scene was filmed.
When John Wick awakens to the Russians in his home, the scene mirrors a similar incident that happened to Keanu Reeves in 2014 (the same year the movie was released), where Reeves awoke to a stalker that had broken into his home. Reeves calmly talked to the stalker, then called the police at the first opportunity he had, and the stalker was arrested soon after.
Bacon grease was placed on Keanu Reeves' face to attract his dog to jump on him when he wakes up in bed.
While shooting a scene with a stuntman, Michael Nyqvist cut his head so badly that his ear was resting on his right shoulder. This resulted in eighty stitches. Some of the last scenes had to be re-done to hide Nyqvist's scar. (Yikes!)
(This one blew my mind!)
The story is loosely inspired by an incident in Texas involving former Navy SEAL Marcus Luttrell, who wrote Lone Survivor, about his fireteam's ordeal during Operation Red Wings in Afghanistan in 2005. Luttrell was given a yellow labrador puppy, whom he named DASY, after the members of his fireteam. On April 1, 2009, at about 1:00 a.m., Luttrell was awakened by a gunshot, and saw four men drive away. DASY was dead in his yard from a gunshot wound. He armed himself with two 9mm Beretta pistols and chased the men through four counties in his truck until police apprehended them. They taunted Luttrell, threatened to kill him, and indicated no remorse for their actions. They were later sentenced for animal cruelty. Luttrell stated later, "I spared them, because I've killed enough people already."
Keanu Reeves' preparation for the role included weapons and martial arts training (eight hours per day for four months).
(And this one tore me up)
The death of John Wick's wife made the role very personal for Keanu Reeves, considering the death of his former girlfriend, Jennifer Syme, in a car accident in 2001. Syme gave birth to their child in 1999, but the child was stillborn. Syme's eventual car accident was claimed to be a result of heavy prescription medication for depression, and reports claim she died instantly. Reeves used that as emotional influence for the role of John Wick in regards to the character's dead wife.
..........
I'm already looking forward to watching the sequels because of how well Keanu did in this film. Totes agree with the 7.4/10 rating. I've always admired him because of how selfless, generous and grounded he is as a person and he may not have the most impressive acting skills but I think his real life is testament to what an awesome dude he really is.
Written by Gabrielle Boyd
Noel Boyd
Author, Life Coach and Motivational Speaker.