"Some things, once they're done can't be undone." 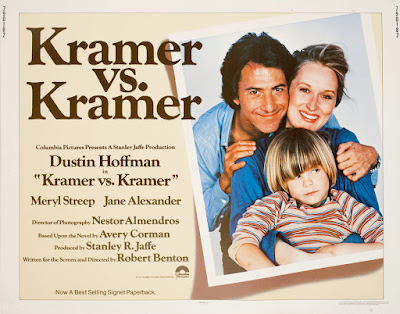 I can't believe it took me this long to watch this spectacular film. Initially I planned to watch just the first half since it was already quite late at night and I thought I'd doze off while it was on. In the end I watched the entire movie from start to finish and I was so emotionally drained by the end of it and amazed at the stellar acting from these legends.
The plot is so simple but unfolds so amazingly well. Ted Kramer (Dustin Hoffman) is a career man who always puts his work before his family. His wife Joanna (Meryl Streep) cannot take it anymore and decides to leave him. They have a young son Billy (Justin Henry) who Ted now has to look after on his own while juggling his job and housekeeping duties. As soon as he readjusts to his new responsibilities, Joanna reappears and wants Billy back. The couple ends up going to court to fight for custody.
Right from the get-go, Ted and Joanna Kramer portray two vastly different personalities and even when they're not saying anything, their body language and non-verbal expressions speak volumes. I felt for both characters throughout the entire movie and my heart broke the most for seven-year-old Billy. 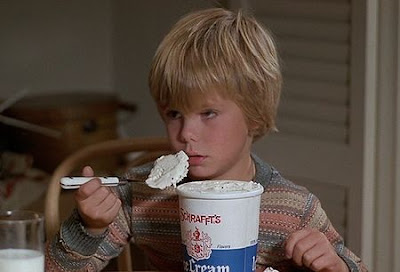 Billy clearly doesn't have any problem double-dipping
There were so many moments where I couldn't hold back my tears because of how realistic the scenes were between father and son, and Justin Henry did such a remarkable job as Billy. He pushed boundaries, sought attention and craved affection just like any child would. Meryl Streep is always a force to be reckoned with and in this film I empathised with her character because of how much of herself she had lost in the course of becoming a wife and mother but at the same time I was also mad at her for leaving Billy. The true standout performance for me was definitely Dustin Hoffman. I used to think he was an overrated actor, but after watching this film, I think the man is an absolute star, albeit slightly insane.
Trivia Time
Dustin Hoffman planned the moment when he throws his wine glass against the wall during the restaurant scene with Meryl Streep. The only person he warned in advance was the cameraman, to make sure that it got in the shot. Streep's shocked reaction was real, but she stayed in character long enough for writer and director Robert Benton to yell cut. In the documentary on the DVD, she recalls yelling at Hoffman as soon as the shot was over for scaring her so badly.
The famous ice cream scene, where Billy challenges his father by skipping dinner and going straight for dessert, was completely improvised by Dustin Hoffman and Justin Henry. Writer and director Robert Benton liked the scene so much that he decided to keep it in the film.
The strength of the performances of the two leads can be at least partly attributed to what was going on in their private lives at the time. Dustin Hoffman was in the midst of a messy divorce, while Meryl Streep was still recovering from the death of her lover, John Cazale.
When Justin Henry was nominated for the Best Actor in a Supporting Role Academy Award, Henry, at the age of eight, became the youngest person to be nominated for this award, as well as the youngest Oscar nominee in any category, a record which still stands today (2020).
Meryl Streep wrote her own courtroom speech upon writer and director Robert Benton's suggestion, after she told him she wasn't satisfied with the way it was originally written.
The highest-grossing movie of 1979.
Meryl Streep left her just-claimed Oscar for the film on the back of a toilet during the 1980 festivities.
There was initially tension between Dustin Hoffman and Meryl Streep. Hoffman was hearing lots of advance publicity about newcomer Streep and how she was mastering the role and Hoffman felt he was being upstaged. When Streep wanted to change around the dialogue in the restaurant meeting scene, Hoffman became furious. As Hoffman recalled, "I hated her guts. Yes, I hated her guts. But I respected her." He accepted that Streep wasn't arguing for what was best for her character, but what was best for the movie.
Meryl Streep said that after Dustin Hoffman hit her to get her into character, she decided she never wanted to work with him again.
Justin Henry, the actor who played the little boy Billy Kramer, retired from acting and went on to be a district manager in Media Sales.
........................
Being a child with divorced parents myself, some scenarios were hard to watch without imagining what it must have been like when my own mum and dad were trying to work through their differences. I really appreciated the fact that the film didn't take sides and it was up to both parents to make the choice of where Billy should be and who he lives with. I'd give this movie a strong 8 or 8.5 because of the incredible acting from the lead characters and the sheer realism of all the scenes and conversations.
Written by Gabrielle Boyd
Noel Boyd
Author, Life Coach and Motivational Speaker.