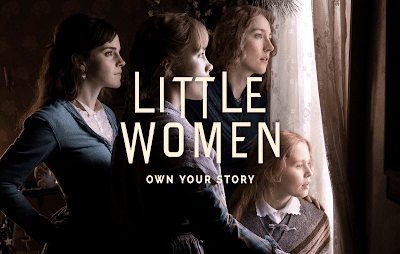 I really wanted to like this remake of the 1994 original. Unfortunately I didn't at all. Perhaps if I had read the book, it might have made a difference. I did like a few elements of the film and some of the actresses' performances but I stopped watching with 30 minutes left of it. I hardly do that with films but this one was really tough and almost exhausting to get through.
In the years after the Civil War, Jo March (Saoirse Ronan) lives in New York City and makes her living as a writer, while her sister Amy March (Florence Pugh) studies painting in Paris. Amy has a chance encounter with Theodore "Laurie" Laurence (Timothée Chalamet), a childhood crush who proposed to Jo, but was ultimately rejected. Their oldest sibling, Meg March (Emma Watson), is married to a schoolteacher, while shy sister Beth (Eliza Scanlen) develops a devastating illness that brings the family back together.
For the first 20 minutes or so I was honestly just trying to remember each character's name and the traits that make them unique. The timeline was extremely messy and it seemed like they were trying to tell a hundred different stories in just 2 hours. Some of the male actors looked so similar that I couldn't tell them apart (but maybe that's just me)! The only female lead I particularly enjoyed was Saoirse Ronan as Jo because her character traits were well defined and she was very passionate without being overbearing. Her attitude was one of being extremely determined and confident while still showing a sense of vulnerability at times and I did like most of her dialogue. 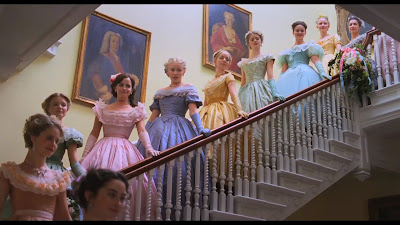 Was the party theme Paddlepop flavors?
I appreciated the attention to detail with things like wardrobe and accessories, the use of horse carriages and pretty landscapes and scenery. I also could acknowledge some of the real-life struggles the women during that period faced like poverty and not being able to work or vote and how the only way they could have any money to their name was by marrying rich. But it was extremely hard to be emotionally invested in the characters when they kept jumping back and forth with random flashbacks without significant changes in their appearances so I didn't know what was happening at present and what was a memory. Meryl Streep was average at best (surprisingly!) with her portrayal of the cold and bitter Aunt March and Florence Pugh's Amy just irritated me. Emma Watson was also fairly mediocre and so was her American accent.
Don't even get me started on the character of Laurie. One minute he was being called Laurie, the next he was being called Teddy...One moment he was in adoration of Jo and the next he was going to marry Amy. There was nothing charming or likeable about him at all IMHO. The debilitating illness Beth developed which led to her unfortunate demise wasn't even enough to salvage this mess of a movie. The trivia about the film was more interesting than the film itself.
Trivia Time
Florence Pugh had just finished filming Midsommar (2019), a few days prior to when she started shooting this movie. She said that getting to play Amy after making such a stressful and anxiety-inducing movie was her version of therapy.
Emma Watson took over the role of Meg March from Emma Stone, who became unavailable due to scheduling conflicts with promoting The Favorite (2018). Coincidentally, Stone previously took over the role of Mia in La La Land (2016) after Watson dropped out of the project due to the commitment of her role as Belle in Beauty and the Beast (2017).
This movie was released December 25, 2019, 25 years after Little Women (1994).
The camera crew had to rely a lot on trick photography, special lenses, and forced perspective in order to obscure the fact that Timothée Chalamet is only five feet, ten inches tall.
The characters are heroines of American literature, but none of the four leading ladies are American. Emma Watson and Florence Pugh are English, and Eliza Scanlen is Australian. Saoirse Ronan was born in Bronx, New York and raised in Ireland.
..................
I definitely won't be watching this again since I couldn't even get through it the first time. I might give the original version a chance. Even though it was rated 7.8/10 on IMDB and received an Oscar, I'd only give it a 5/10. It might have worked better as a miniseries on Netflix so they could take their time to tell the story in chronological order. Little Women was more than a Little Disappointing.
Written by Gabrielle Boyd.
Noel Boyd
Author, Life Coach and Motivational Speaker.