"Justice is swift. Vengeance is faster." 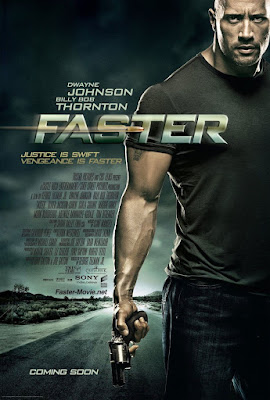 I will say I tend to be more inclined to watch action movies when I know The Rock is in it. His acting chops have gotten better over the years but I've been a fan since he became The People's Champion in the WWE. This film definitely falls into that category of unrealistic but still entertaining 'dick flicks', with fast cars, useless cops and LOTS of shooting.
An ex-convict known only as 'Driver' (The Rock) sets out to kill a bunch of seemingly random people. Eventually we find out that 'Cop' (Billy Bob) and 'Killer' (Oliver Jackson-Cohen) are hot on his trail. As the story unfolds, we discover there's more to Driver's agenda than we think.
For almost half the movie, The Rock is seen driving an awesome Chevelle (I had to google this, I'm not that well-versed in car models) and all the car chase scenes were exceptionally done. The fight sequences were fun to watch too. I would love to see The Rock do more of his signature wrestling moves in films but maybe there are copyright issues with that stuff. How awesome would it be to see him give his opponent a Rock Bottom during a fight scene?
Let's be real. I highly doubt anyone would pick this film for it's plot. The storyline is a tad forgettable, just your average run-of-the-mill revenge story and the characters are not the kind you would be that emotionally invested in. I did enjoy the gorgeous Carla Gugino's performance but it was hard not to picture her and Oliver Jackson-Cohen as mother and son from the Haunting of Hill House. 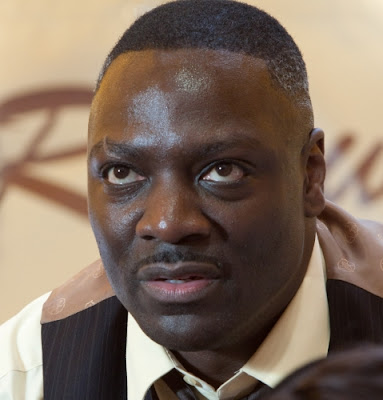 I knew I recognized this dude from somewhere... 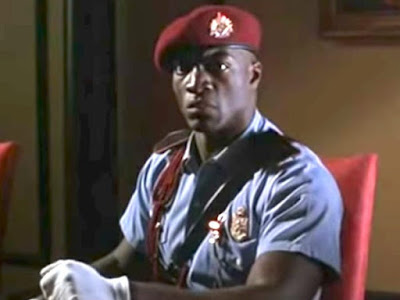 He played the guard in Ace Ventura: When Nature Calls. His real name is Adewale Akinnuoye-Agbaje. Not gonna lie. I'm genuinely not sure how to pronounce that.
I have never been a fan of Billy Bob so I didn't really care about the fate of his character at all. Him and the other cops were hopeless at figuring out how to catch The Rock even though he's a 6ft 4 Samoan dude that's driving a muscle car across the country. Oh and (SPOILER) I forgot to mention that The Rock survives being shot in the head...twice. Of course he does.
The twist was super predictable for me only because I knew they wouldn't let the hero or in this case anti-hero die without that satisfying vengeance he was after. If this movie was playing in the background at a friend's house I'd watch it just to be polite. But I wouldn't go out of my way to re-watch it on my own time. The Rock as Hobbes in the Fast and Furious franchise is a lot wittier and happy-go-lucky and less morose and grim than he was in this film.
Written by Gabrielle Boyd
Noel Boyd
Author, Life Coach and Motivational Speaker.