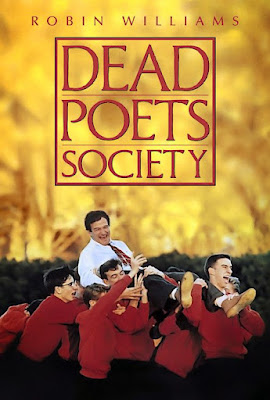 I've always wanted to watch this and I finally got my chance. I may be biased but I think the number of Robin Williams films I've watched that I haven't enjoyed can be counted with one hand. I definitely loved this one. It made me feel so many different emotions and despite the fact that it was released more than 30 years ago, there are many issues that are still relevant today.
Williams plays a bad-ass English teacher named John Keating and he constantly surprises the boys in his class with his unorthodox methods and unconventional teaching style. Neil Perry is an aspiring actor who would love to pursue his passion but his overbearing father is one of those typical 'I didn't get to live my dreams so you have to live them for me.' (Are you sure he wasn't Singaporean?) Keating tells the boys about the Dead Poets Society, a secret club that he was in as a youth in the very same school and as they learn more about those dead poets, they also learn more about themselves and each boy rebels and pushes boundaries in his own way.
Personally I wish I had had a teacher as bold and brave as John Keating but I was fortunate to have a few good ones back in the day. They wouldn't go by the book and for that reason I think that's why they will always be memorable to me. Some of the lessons Keating taught his class were so simple but so important. He would encourage the boys to rip pages out of a textbook and stand on tables to 'see things from a different perspective.'
I had a bad feeling I knew where the movie was heading halfway through because I vaguely remembered reading about it somewhere ages ago. MAJOR SPOILER: Neil ends up killing himself because he just can't see any way that he would be able to live his own life happily and not under his father's thumb. 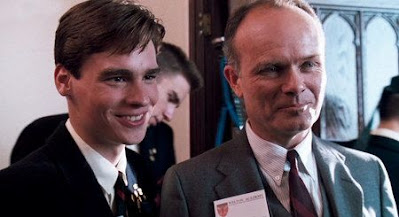 Red Forman making his son feel like a dumbass long before Eric came along.
It was absolutely devastating for a number of reasons, the main one being that Robin Williams himself took his own life in 2014 and the whole world was heartbroken. I've always felt that the film industry lost a true talent and it has never been the same since his passing. If only he had sought more help or found inner peace somehow, he might have been able to deal with his inner demons. It just goes to show that even the people that seem to be the happiest or funniest are struggling with keeping it all together.
Another reason that the movie's climax was so saddening was the fact that even in this day and age there are so many young adults and teens that have immense pressure put on them by parents, teachers and their peers to the point that they too decide to end it all at such a young age. I was so angry at the character of Neil's father because he just never cared about what really made his son happy. Since I became a parent, I've promised myself that I will always put my children's happiness first. Nothing else is of higher importance. I know I would definitely get frustrated if I saw that they weren't ambitious but when the time comes, I'd hope to have a mature conversation with them and be able to see where they were coming from instead of just placing impossible or incredulous expectations of them.
Here are some interesting movie trivia tidbits I found:
Director Peter Weir chose to shoot the film chronologically to better capture the development of the relationships between the boys and their growing respect for Mr Keating.
Robin Williams considered this movie as one of his favorites and Peter Weir as the best director he had ever worked with.
Upon the death of Robin Williams in 2014, the famous line "O Captain! My Captain!" was used by many media outlets in his obituaries.
At the premiere, Kurtwood Smith saw a family with the father domineering his son very much like his own character in the film. After the film Smith noticed the family leaving and saw that the father was crying.
In a SiriusXM interview in July 2016, Matt Damon revealed that he and best friend Ben Affleck auditioned for unspecified roles.
Lara Flynn Boyle had a small role as Chet's sister, but her character was cut. However, she appears in the movie, lying down on the floor while Knox speaks with Chet's parents.

Can you imagine being Lara Flynn Boyle and being told not to attend the movie premiere because your character was cut? OUCH.
Mr Perry wants his son Neil to be a doctor. Actor Robert Sean Leonard who played Neil would later play a doctor on House (2004). Neil also predicts that Knox (Josh Charles) will become a lawyer. Charles would later play a lawyer on The Good Wife (2009).
Ethan Hawke's first impression of director Peter Weir was that he 'spoke funny.' Weir was the first Australian that the young Hawke had ever met.
*My own little tidbit: I found the first link between the movies I chose to watch for this challenge. The 2nd movie on my A-Z list 'Boyhood' also starred Ethan Hawke.
I'd definitely rate this as a 8/10 like IMDB did, not sure if I would re-watch it anytime soon but maybe in the future when I need to motivate my children to grab life by the balls.
Written by Gabrielle Boyd.
Noel Boyd
Author, Life Coach and Motivational Speaker.