"Everyone is a filmmaker...at heart." 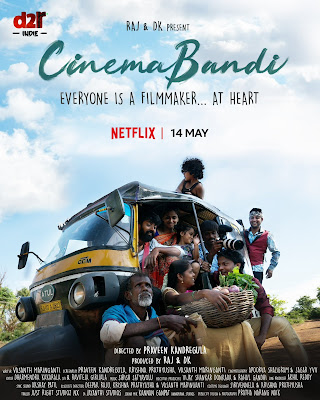 This film is one of those hidden gems on Netflix that was such a delight from start to finish. It is in a mixture of the Kannada and Telugu language and was released very recently (14/5/2021). I stumbled upon it while searching for a movie starting with the letter 'C'. Initially I wanted to watch Colombiana but this one called out to me because the synopsis was quite original and seemed very intriguing.
An auto-rickshaw driver Veera finds an expensive-looking bag in the back of his vehicle and discovers that it contains a high-end camera. With the help of his friend Gana (who is a wedding photographer) they set out to create their very own film in the hopes of earning lots of money and making positive changes to their village, like reliable electricity and water sources.
Cinematically, there were so many beautiful shots of the sunset and natural scenery in the village and around the town areas. The actors were so natural and the chemistry was amazing. The female lead Manga is feisty and fierce and I loved her comebacks and no-nonsense attitude. Grandpa was definitely a scene-stealer even though he literally had no lines. Every character was so likeable and a lot of scenes had me laughing out loud at the sarcastic dialogue and how underprepared they were at times. It's remarkable that this was the directorial debut of Praveen Karegula. 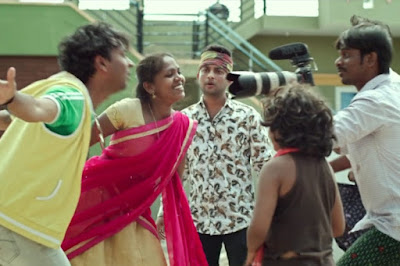 Maridesh and Manga forget that they're not supposed to look directly at the camera
Although the movie presents itself predominantly as a comedy, there are also some poignant moments that reflect the reality of residing in a small rural village. They are drought-stricken and they have limited power to charge or use their appliances among many other struggles.
It's movies like these that will restore your faith in humanity because of how lighthearted and moving it is. One of my favorite moments was when a whole group of villagers came to Gana's aid when he was trying to capture a scene while sitting on a bullock-cart. It reminded me of those real-life scenarios where a whole bunch of people come together to move a bus or train to help someone trapped underneath. Of course the climax of the film will bring a heartwarming tear to your eye as well.
There wasn't a lot of information about this movie online since it is so new but so far all the reviews I have read have been positive and mine is no exception. I'd definitely watch this again and would rate it a 7.5/10 for how charming and unique it is.
Written by Gabrielle Boyd.
Noel Boyd
Author, Life Coach and Motivational Speaker.