"You know how everyone's always saying seize the moment? I don't know, I'm kinda thinking it's the other way around. You know, like the moment seizes us." 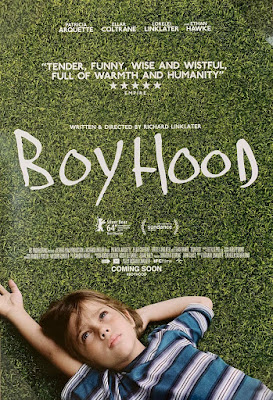 First of all, let me just say that I had never even heard of this movie prior to doing this challenge and what.a.film. I didn't watch the trailer because sometimes that just gives everything away or it can be totally misleading.
The synopsis was pretty vague and all it said was "The life of Mason, from early childhood to his arrival at college." I recognized a few of the actors' names and I thought 'hmmm, let's see what this has to offer.'
For the first half of the movie, I felt a bit restless because I kept anticipating a tragedy or a conflict between the characters but it never really came. Patricia Arquette was quite endearing at the beginning as Mason's single mother just trying to make ends meet and provide a better life for her kids but soon I began to get quite frustrated with her breathy voice and lack of emotion in certain scenarios. Lorelei Linklater (who is also the director's daughter) as Sam was quite an annoying character and very narcissistic but I think that was clearly intentional.*
*I would later find out that she had lost a bit of interest in being involved in this film and she even requested for her father to kill her character off, but thankfully she regained her enthusiasm and continued with the project.
As the movie progressed, I started to notice certain patterns in the scenes. A lot of them seemed quite irrelevant because they never really went anywhere (e.g while at a baseball game, Mason walks over to get a hotdog and returns to his seat but they never show him eating it and nothing happened during those few minutes besides him putting condiments on said hotdog)
I was very curious where the story was going to take me and that's when I started to realize the most mind-blowing element that makes this movie stand out to me so much. Instead of using older actors for different ages (kid/preteen/teen) the cast was just allowed to grow older naturally. Usually you see this in long-running TV shows or movie franchises like the Harry Potter series, Modern Family or Two and a Half Men but this was the first time I actually saw it in just one movie. If River Phoenix and Leonardo DiCaprio had a love child, I think he would look like Ellar Coltrane.
The plot itself is essentially just about a family trying to get by when it came to issues like divorce, constantly having to move, losing friends and pursuing their own goals and dreams. I was fascinated that I got to witness the actors gradually age and change in the span of 2 hours and 45 minutes. If you're looking for a film that has plot twists or is overly dramatized, this is not it. It reminded me a lot of another movie called The Way, Way Back because of how realistic a lot of the situations were and sometimes, emotions and arguments just didn't escalate to the levels that we're so used to in other coming-of-age dramas.
Here are some amazing trivia tidbits from IMDB about this remarkable film:
Ellar Coltrane, who plays Mason, was 7 years old when the movie started filming and 19 when it was finished. (That's 12 whole years. Dude...)
In relation to the previous tidbit, the film was shot over 45 days from May 2002 to August 2013, which spans more than 4,000 days.
During the 12-year shoot, both Ethan Hawke and Patricia Arquette actually experienced divorces, re-marriage and had another child. 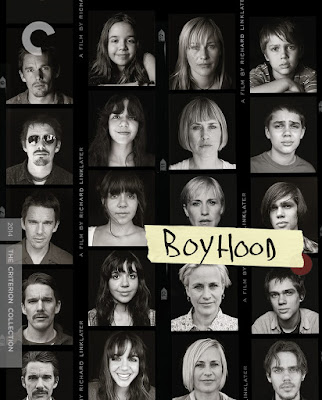 Imagine getting the cast together for just one week a year, for twelve years. #effort
Trivia Tidbits cont'd:
The exact timeframe of the film is never made completely clear. The constantly changing time setting can only be identified by pop-culture references, the soundtrack, and advances in the technology used by the characters.
Linklater's method behind production was essentially to make several 10- to 15-minute short films over the course of 12 years, each depicting a year in the life of the boy, and then edit them together as a feature film. (If this isn't seen as a tremendous effort and commitment to film-making, I don't know what is!)
President Barack Obama's favorite film of 2014.
And the best one:
Boyhood is one of only 11 movies to receive a Metascore of 100, the highest possible score that can be attained from professional movie critics on the review aggregate Metacritic, and so far the only film to receive this score upon its original release. (Just as a comparison, other movies with this score include The Godfather, Casablanca and Citizen Kane)
I highly recommend Boyhood and I commend the entire cast and crew for committing to this project for as long as they did. Easily a 7.5 or 8/10 for me. I'm extremely happy I stumbled upon it and I couldn't wait to read more about it once it was over.
Written by Gabrielle Boyd.