on September 07, 2012
On Monday, I decided to have late lunch at Shibly Muslim Food & Restaurant. The hawker center opposite my house was closed for spring cleaning so Indian food was the next best option. It was a toss between Casuarina Curry and Shibly but I prefer chicken briyani at the latter.

I ordered my food, took a seat and spotted something furry on the gate of a nearby house. This furry little thing was none other than a long tailed macaque. In fact, there were two of them. I've been staying at Casuarina Road for almost 34 years so seeing them wasn't out of the ordinary. When my food arrived, I got up to get myself a pack of papadum. As I walked back to the table, I saw the bigger macaque climb down the gate and up a tree he went. So I took this picture...

Having worked with primates for 3 years at the Singapore Zoo, I dare say I know more about these animals than the average Joe. I know first hand that I should avoid eye contact with these animals and that's exactly what I did. All along, I was glancing at them from the corner of my eye. My instincts are never ever wrong when it comes to animals and humans. Something about that macaque up in the tree didn't feel right. Minutes later, that macaque climbed down and headed my direction. So did the juvenile that was on the gate. There was a car parked next to me so I lost sight of them for a few seconds.

Next thing I know, the bigger macaque shows up at the front of the car. He's bearing his teeth and inching closer. When I got up to shout at it, the smaller macaque jumped onto the table. While reaching for my phone, I almost got bit. It missed by mere millimeters. It then grabbed the packet of papadum and my zippo lighter. Yes my brand new Zippo lighter that I got as a gift! I looked down at the table and saw nothing but mess!!! My drink and briyani was both overturned.

Do you know how sad I felt?! My close friends and family know how sacred food is to me. Simply put, I cherish my food. To see my food in that state made me so sad. I wish I had taken pictures of the mess the two morons made but I didn't. I wasn't in the right state of mind.

Anyway the next day as I was about to grab late lunch, yes my meals are always late, my mom yelled out that my neighbour was having an issue with monkeys. I rushed out of the house to see a macaque on his roof. Once again this macaque was bearing his teeth and after much chasing on our part, it got off the roof and headed to the house opposite mine. Apparently this macaque fought with another and the smaller one was left injured in another house. 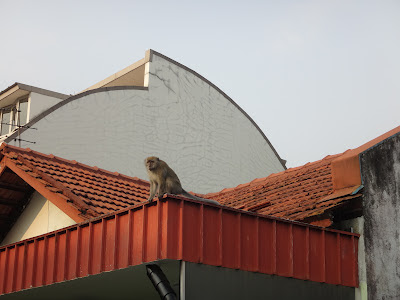 I called the police hotline because I didn't have time to Google for AVA's hotline. The phone call was funny though...

Me: Hey man, I know this isn't the right number to call. We have a problem with two monkeys and we need assistance.

Police: Sir, did you say monkeys?

Me: Well both of them got into a fight and one is injured. We managed to get one away but he's threating to attack my neighbours and I.

Police: Sir if we dispatch the paramedics, I don't think they will treat the injured monkey.

Me: Hahaha. Tell me you didn't just say that!!!

Police: *snigger* Sir I'll inform the relevant agency and they will dispatch someone. Ok?


So yes that was my conversation with the cops. After 15 minutes, a patrol car shows up. They monitored the situation for a bit, tell us that they have informed the AVA and they will be here shortly. They added that since the injured monkey is immobilized, we won't have to worry about it going anywhere. Boy were they wrong! 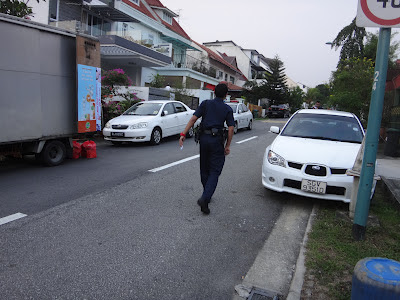 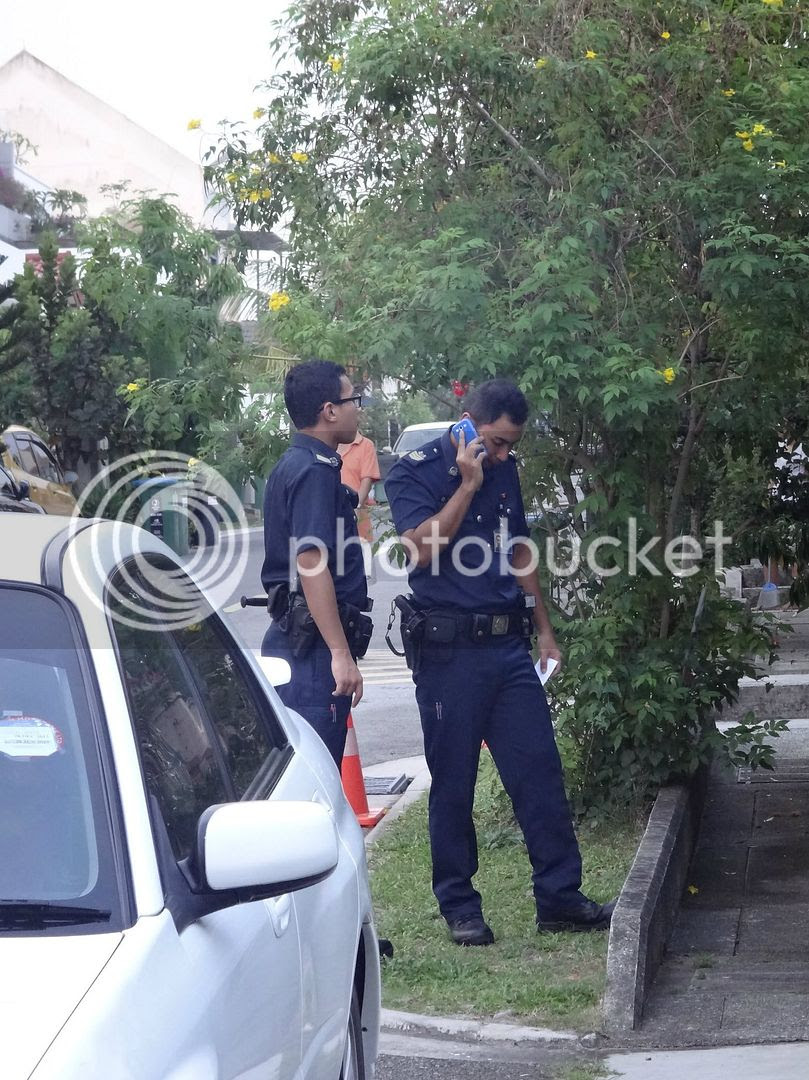 Not only did the injured monkey move, it ended up 7 houses away!!! Mind you, this monkey drama lasted for TWO HOURS! Shortly before the sun went down, the good folks from ACRES arrived. If you don't know who they are, here's their website: http://www.acres.org.sg/ 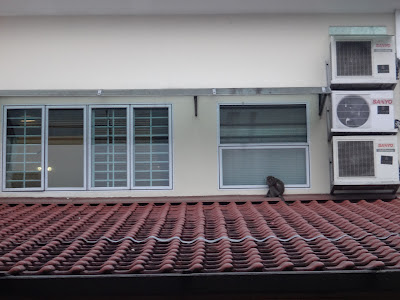 he decided to take refuge on the roof of this house...


They did a fantastic job in capturing the injured macaque! Watch the video for yourself...


This post doesn't have a happy ending. The macaque was put down because he had an abscess close to his bone on his right arm and the bone was broken as well. The vets concluded that he would need an amputation. But doing so would mean that he can't be released back into the wild. So I guess they did the right thing to put him down.

To summarize this post, we are facing a problem with these monkeys in our neighbourhood. Our dustbins get overturned, they steal from houses and have recently started entering the restaurants to intimidate and steal from customers. I blame the idiots that have been feeding the monkeys. The same idiots that slow down along Upper Thomson Road to feed the monkeys even though there are HUGE signs that warn against doing so. You can't expect much from uneducated fools can you?!

To the relevant agencies, please do something about this. And no, I don't mean culling them. It's bad enough that plans are underway to cull the wild boars. Even the petition which I started that got 421 signatures from celebrities and folks from around the world didn't help. There are many other ways to deal with the macaque issue. Let's just hope you'll do something before someone gets hurt.