on May 15, 2012
When I first heard of the horrific accident that happened along Rochor Road, I assumed that it was just one of those freak accidents that happen. But then I read on a news portal that the taxi's engine was found 30 metres away from the vehicle. That must have been one heck of an impact!
Before I continue with this post, let me give you a rundown on what happened. This is for the benefit of fellow Singaporeans that don't know what happened (trust me not everyone follows the news) and readers from other parts of the globe. 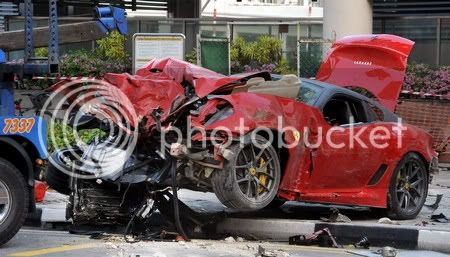 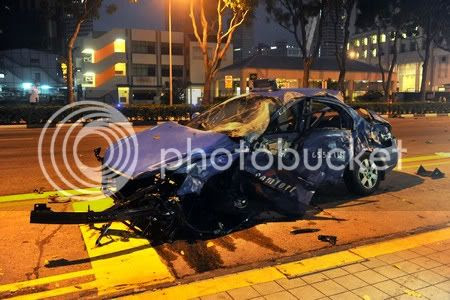 
On Saturday (12th May) in the wee hours of the morning, a Ferrari driven by Mr. Ma Chi, a Chinese national, crashed into a ComfortDelGro taxi driven by Mr. Cheng Teck Hock. Mr. Cheng had a Japanese tourist in her 20's in his taxi at the time and their taxi went on to hit motorcyclist Mr. Muhammad Najib Ghazali. The Ferrari driver died on the spot while his passenger, a Chinese national in her 20's suffered serious injuries. The Japanese tourist however died after she was sent to hospital. Mr. Muhammad Najib suffered spinal injuries and Mr. Cheng passed away last night.

Click here to view an animated gif that was created from video footage by another taxi.

As you can see, the Ferrari ran a red light and smashed into Mr. Cheng's taxi. I don't need to tell you how messed up this is! Mr. Cheng, A SINGAPOREAN, was out earning money so he can feed his family. All it took was one selfish human being to ruin that day. He was the sole breadwinner and father of three school-going children. He didn't have insurance because he simply couldn't afford it. I feel for Mr. Cheng's family. To have something so precious taken away from them because some rich punk was a prick on the road.
And the Japanese girl... She was here visiting our country. She had her whole life ahead of her. She had her life robbed from her just when it was starting. That's not cool at all.
You know people, I really am angry. It's not because the fella is a Chinese national. I can care less where he is from. It's the fact that this piece of garbage was selfish and inconsiderate. It's people like this that irritate the shit out of me.
It does get worse. An eyewitness saw a man pick up SIX S$50 notes lying on the ground next to the poor Japanese girl who was crying for help. He picked up the money and walked away briskly. What kind of person does this? Seriously man. Is this what this world is coming to???!!!!
I've got something to say to the Singapore media. Please stop glamorizing the Ferrari driver. Honestly it's sickening! So what if he is a millionaire? Does he own a share in your newspaper? How do you think the families involved felt when they read stuff like "he is tall, young, handsome and successful" and "he has made tremendous contributions" to his clan association. To me, it sounds like the fella is a victim. Myself along with rest of the population know that he isn't. The Singapore mainstream media just needs to keep it real. Spare a thought for your countrymen and the true victims. It's that simple.
My deepest condolences goes out to the families of Mr. Cheng and the Japanese tourist. If you want to help Mr. Cheng's family out, please click here to find out how. To Mr. Muhammad Najib, get well soon buddy!!
Noel Boyd
Author, Life Coach and Motivational Speaker.