on May 14, 2012
A friend of mine sent this via email last night. He was amused some guy would get the Singapore Armed Forces (SAF) pledge tattooed on his back. Ya know, I ain't gonna judge this guy. He obviously loves the SAF and that's cool! 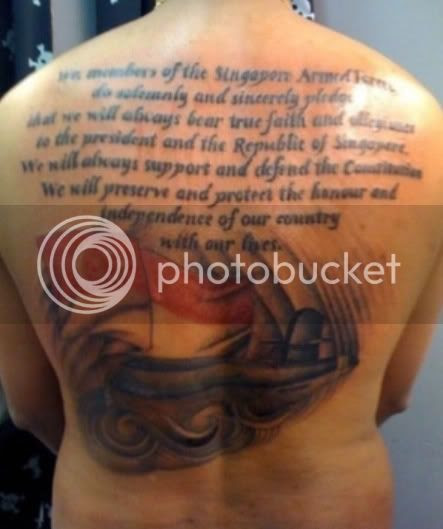 I see a submarine in the tattoo so I'm assuming he's from the navy? I think this man deserves a promotion!

We, Members of the Singapore Armed Forces
do solemnly and sincerely pledge that:
We will always bear true faith and allegiance to the President and the Republic of Singapore;
We will always support and defend the Constitution;
We will preserve and protect the honour and independence of our country with our lives.
Reactions:
Noel Boyd
Author, Life Coach and Motivational Speaker.