"Why you pursue something is as important as what you pursue." 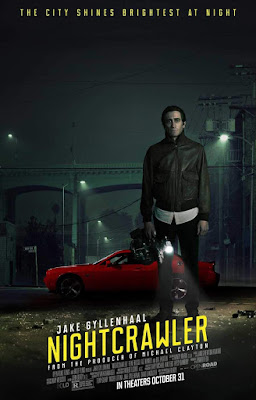 When I first saw this movie poster I thought it was about the mutant with the same name from X-Men. I had no idea what to expect because I didn't watch the trailer or read anything about it. I enjoyed it immensely and it reminded me why I think Jake Gyllenhaal is super underrated.
Lou Bloom (Gyllenhaal) is a driven young man desperate for work and he stumbles upon the high-speed world of crime journalism. From the very beginning, you find out that he's pretty much a conman and a thief so it seems only fitting that he falls right into his new cutthroat career very easily. Nina (Rene Russo) is a veteran in the local TV news industry and she takes a liking to Lou's work, not knowing that he is slowly slipping into the darkness that comes with being a nightcrawler.
This movie disturbed me on so many levels. The way they start building Lou Bloom's character doesn't take long because Jake Gyllenhaal is perfect for this role. He is slightly neurotic, highly intelligent and committed to his craft, very socially awkward but extremely motivated to get his way at all costs. Both Noel and I felt that he could play The Joker exceptionally.  I always thought of Rene Russo as just an average actress but she was outstanding as Nina too. I only wish they had shown more of the relationship between Lou and Nina because I have a strong feeling it would be 100% weird af. 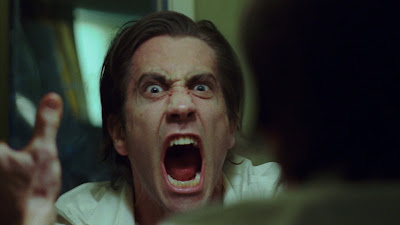 Jake after finding out he wasn't nominated for an Academy Award
Rick (Riz Ahmed) was also brilliant because he had this gentle pitiful quality about his character that you never really found out about. He seemed like a loner who was happy to tag along for the ride, not knowing the real dangers that awaited him around every corner. The way the writer & director told this story was so clever because it made you feel like you were really part of all these horrific crimes that were being documented.
I think fundamentally all humans are voyeurs so this sort of narrative was so riveting to watch because you had no idea what was going to happen next. It made me feel quite uneasy because at times it was a reflection of our society and how addicted everybody can be to videos and images of violence and crime.
Trivia Time
Jake Gyllenhaal lost 20 pounds for his role. This was Gyllenhaal's own idea, as he visualized Lou as a hungry coyote.
During the scene where Jake Gyllenhaal screams at himself in the mirror, Gyllenhaal got so into this improvised scene that the mirror broke, cutting his hand. He was driven to the hospital by the director after a 19-hour day of working and got 46 stitches in a 4-hour long operation, returning to the set only 6 hours after being discharged. This is the reason why Gyllenhaal had his hand behind his back in the scene where he tells the scrapyard owner his motto. (Reminds me of the time when DiCaprio cut his hand on the glass in Django. Respect)
Jake Gyllenhaal and Riz Ahmed rode along with actual nightcrawlers in Los Angeles to prepare for their roles.
The filmmakers made a point of not having Lou Bloom undergo a "character arc" because they felt he would have become a certain type of person and stayed that way as an adult. That was also why the initial scene has Lou assaulting and robbing a security guard; it was important that the audience not feel Lou became a worse person because of his work as a nightcrawler, but instead recognized he was malevolent from the start.
Jake Gyllenhaal memorized the entire movie like a play.
Director Dan Gilroy on the impetus for the film: "I think to some degree it's certainly an indictment of local television news, but I'd like to cast a wider net in the sense that all of us really watch these images. I would hope that maybe a viewer would take it further and maybe go, 'Why do I watch these images and how many of these images do I want to put into my own spirit?'
Despite receiving nominations for Best Actor at the Golden Globes, BAFTAs, SAG, Critics Choice awards, Independent Spirit Awards and even the Saturn Awards, Jake Gyllenhaal failed to receive an Academy Award nomination. Critics, audiences, major film groups and publications considered this a major snub. He is only one of eight actors that this has happened to. (Totally ridiculous! He should have won)
Directorial debut of Dan Gilroy.
This film is not related to the Marvel comics character Nightcrawler, who is a member of the X-Men. However, several actors from this film would later collaborate with Marvel projects. Jake Gyllenhaal played Mysterio in Spider-Man: Far From Home (2019) and Rene Russo played Frigga in the MCU films Thor (2011), Thor: The Dark World (2013) and Avengers: Endgame (2019). Riz Ahmed played Carlton Drake/Riot in Sony's Venom (2018).
During a Q&A, director Dan Gilroy stated that he views Lou's insane drive as an "infection" that spreads to each character Lou interacts with throughout the film. At the closing of the film, where Lou's company vans are parting ways down different streets is, as Gilroy describes, "the infection spreading through the veins of the city."
..............
It was quite unnerving to me that a lot of the crimes were probably happening in real life and I couldn't wrap my head around the fact that authentic nightcrawlers obviously exist because someone's gotta get the job done right? I feel like they are in a similar category to paparazzi photographers only they're on the hunt for more graphic results. These reporters and journalists have to be so thick-skinned and bold because they know they are putting themselves in danger, invading people's privacy and pushing boundaries and what's the worst part is that if they see a crime or wrongdoing taking place right in front of them, odds are they will document it instead of helping those in need. Even though Nightcrawler made my skin crawl more than a few times, I give it a strong 7/10.
Written by Gabrielle Boyd