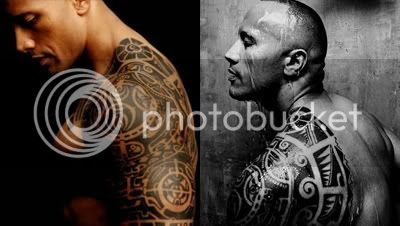 This nine time world wrestling champion is now a Hollywood Star. He made history for being the highest paid actor in his first starring role. That role was in the Scorpion King which he did in 2001. He earned a whopping US$5.5 million! To date, the Rock has worked movies such as The Rundown, Be Cool, The Game Plan, Gridiron Gang, Doom, and Get Smart.

Let's talk about The Rock's tattoo. Dwayne traveled to Hawaii in 2003 to get this impressive ink done by Po'oino Yrondi. Like all proper Polynesian tattoos, the tattoo is loaded with meaning. Dwayne's tattoo has coconut leaves, sun, the Great Eye and tortoise shell among others. To find out what all these mean, check out this website. I guarantee that you will be intrigued.

His arm and shoulder blade took 15 to 20 hours to complete, that's not including his chest piece. His tattoo was done the traditional way. Not in a tattoo studio but in a hut on a straw mat with his family and friends around him. The tattoo tells the story of his life and what he represents. It's an amazing piece of ink on one of the greatest entertainers that has graced the WWE.