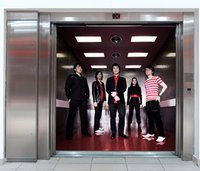 flying off the shelves, Electrico is one band we just can't seem to get enough of!

Catch them in an exclusive performance at Bar None!