on November 20, 2013
People have been asking me "WHAT DID YOU DO FOR YOUR BIRTHDAY??!" so I figured I'd write a blog post. Just so I can turn around and say "READ MY BLOG!!!". Fair enough right?

For starters, Stephanie created this really sweet Tumblr blog that lists everything we have done together. From our first kiss to our first visit to the Singapore Zoo. Halfway through reading it, I began tearing  a little because it was so touching. This gift is priceless! If you are thinking of reading it, you can't! Stephanie has password protected the blog. Heck even I can't remember the password! But here's a tiny little screenshot...

The lovely people from Nuffnang sent me a gift that encourages me to drink like a Mexican cartel boss! It's roulette with shot glasses. This is so cool! I'll bring this down to their office soon so we can all drink like bosses! 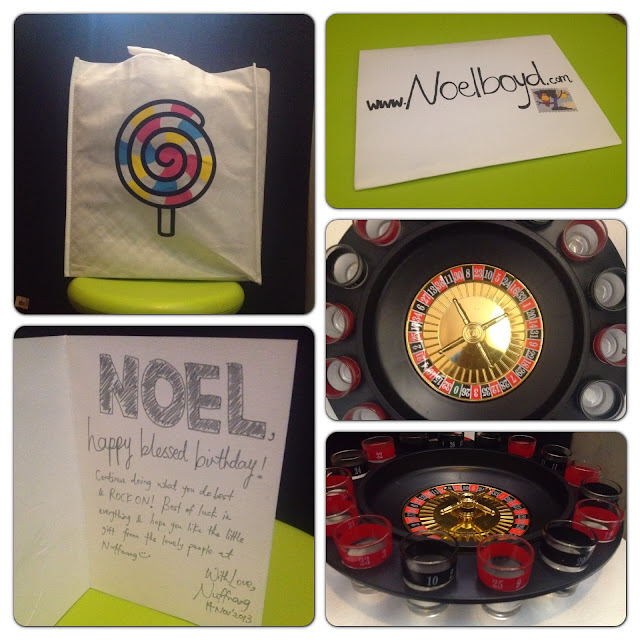 They sent this awesome card too!

On Thursday night, I made my way to Rasputin Bar & Restaurant, a Russian themed establishment at Clarke Quay. The general manager Marco demanded that I show up. Show up I did!

Before we get to what went down that night, I need to tell you about Marco and I. We've been friends since 2004. We worked together at a club in Orchard Road, gotten drunk countless times and we traveled India too. He is an A STAR guy so if you are ever in Clarke Quay, visit him at Rasputin! Ok?


Next thing I know, I woke up the morning after with the mother of all hangovers! It's like I was still drunk but with all the symptoms of a hangover. I was sick for close to 26 hours! FML! Needless to say I stayed off alcohol for that day. The next day however Giles and Iskandar, watch them in action here, threw a kickass barbecue. I ate, had a few beers and we watched two episodes of Ghost Adventures. Fun night. Thank you gentlemen!

So there you have it! That was my birthday week. It was filled with lots of alcohol and good company. I can't ask for more to be honest. I'm blessed!
Reactions:
Noel Boyd
Author, Life Coach and Motivational Speaker.