on November 03, 2008
I guess ya'll already heard about the teacher that submitted a picture of herself to a Wicked Weasel bikini competition? It's the talk of coffeshops around our sunny little island. I bet taxi drivers are talking about her too. Why wouldn't they? Cabbies in Singapore are just as good as the reporters from the New Paper. Heh!

Seriously man, what's up with Singaporeans?! Can't a teacher wear a bikini? Is it that wrong?? So what if she entered a competition? It wasn't like she had her legs spread wide open. Forget the fact that she was in a micro bikini. I think micro bikinis are sexy. Guys, look at the picture below and tell me this chick from Wicked Weazel isn't sexy! 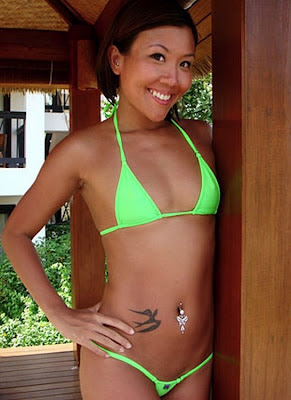 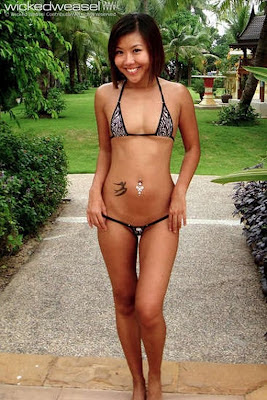 The pictures I saw of her was just fun stuff. Nothing bad at all. It certainly wasn't meant to create a stir in the media.

It's not like she's in a sex video. Even then, teachers do have sex right? Maybe not all. When I was in school, there were a bunch of old hags that were still 'Miss' when I left after five years. I bet they still aren't married!

We are supposed to be a rising nation. Everything around me seems to be changing. Our airport terminals are getting bigger, we have the Singapore F1 and one of the best transportation systems in the world. While everything is improving, this lion city is still in fact conservative.