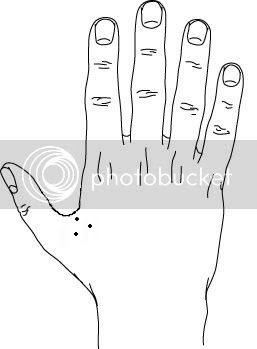 In parts of France, the dots stand for 'Mort Aux Vaches'. When translated, it means 'Death to cows'. What that really means is 'Death to cops'. Shocking ain't it?!

The hobos and sailors look upon the tattoo as a protective symbol. It is a tradition for sailors to get this tattoo on their firsr voyage. It's an easy tattoo to do with a needle and ink and it can be done on board the ship by anyone. Among the Danish sailors, this tattoo is often thought to mean "faith, hope and love".

The three dot tattoo is known as "Görmem, Duymam, Söylemem" in Turkey. It means, "I hear nothing, I see nothing and I tell nothing". Having this tattoo in Turkey means a person has taken an oath to a certain society. He has to be willing to sacifice himself in favour of the society.

This tattoo has to be the most common tattoo used among gangs throughout the world. Besides the Cuban and Russian mafia, the Hispanic and Asian gangs have used this tattoo for years.

I hope you've enjoyed this edition of Tattoo Education. Look out for the next one two Sundays from now.