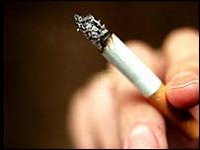 I figured I should have a say in this. Since every god damn non-smoker seems to be writing to the press. Give us a god damn break!

It’s not like we’re not paying our taxes. Nor are we buying contraband cigarettes. I’m paying SGD$11.50 for a pack of Marlboro Reds. If I was in , I’ll be paying SGD$1.80. Do you see the difference? If you think about it, each pack that we buy contributes to our economy.

DJ Mario from Power98 had the cheek to whine on his timeslot, about sitting next to a smoking designated table. In yesterday’s Today newspaper, a woman complained about the smoking designated tables at the Lagoon Food Centre (). She remarked that the smokers got the best tables in the food centre and when there was sea breeze, it smelt of cigarette smoke.

Let’s talk about for a second. I do not understand the logic behind the total smoking ban. Would it have been that difficult to have a designated area? After all, lots of tourists smoke and is a famous after-party hangout.

My parents visited Adam Road Food Centre recently. My dad being a smoker couldn’t find a smoking table. Reason? A couple of non-smoking assholes were occupying the tables. If I was there, I’ll stand right next to their table and smoke. Fuck, I’ll blow smoke into their face. If they had to balls to say anything, I’ll shove their food off the table.

I’ve got a solution for this problem. Smokers will probably be pissed but I think it’s logical. Now remember that this is coming from a smoker as well. FYI, I smoke an average of 40 sticks a day. The government should have banned smoking completely at all food outlets. Meaning, no smoking designated areas whatsoever. It’s a straight to the point cut-out. The reason I say this is because I’m sick of the bitching that’s been going on since the ban commenced.

Being an educated Singaporean, I do understand the health risks that we smokers face. But I also understand that we have a choice in life. I choose to smoke and drink. I choose to smoke 40 sticks a day with my 6 pack of Tiger. Why? Cos I do have a choice. The images that are on each pack of cigarettes, have never affected me. Why should it when I’m gonna die someday whether I like it or not.

And that folks…is what I have to say about the SMOKING BAN!